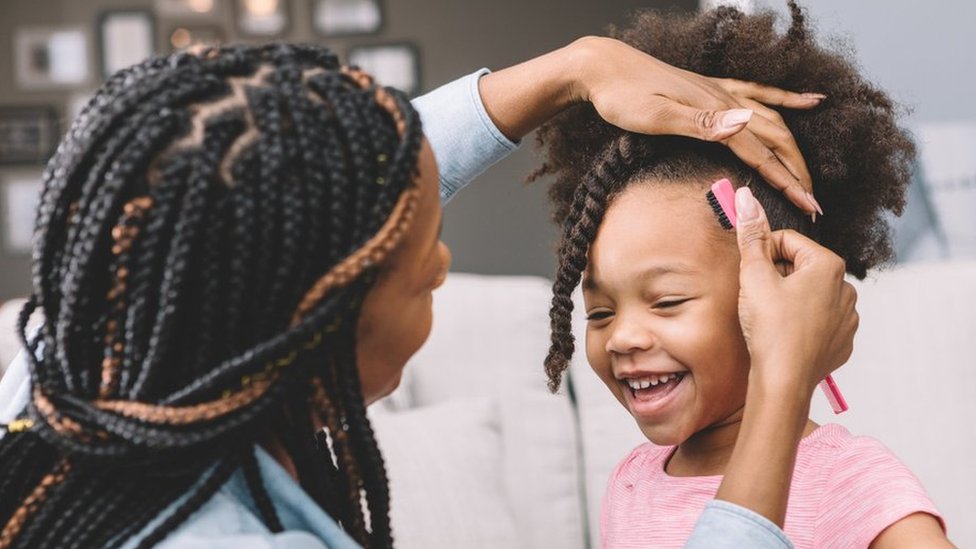 A new online survey will ask people about their experiences of growing up with Afro-textured hair in the UK.

The organisers hope the responses will be used to create new national guidance against Afro hair discrimination in schools.

"Afro hair discrimination is racism - and, discrimination based on hair texture is illegal. We're encouraging all black communities, and parents of children with Afro hair, to share their experiences," said L'myah Sherae, director of racial justice group Enact Equality, who is leading the project.

Children will also be encouraged to share their experiences with parents and adults if they have Afro hair or hairstyles such as box braids.

Last year, Enact Equality campaigned for discrimination towards people with Afro-textured hair to be officially classed as a form of racism.

It led to the Prime Minister's Office and the Equality and Human Rights Commission - whose job it is to make sure all people are treated equally in the UK - to agree to publish the tougher guidance on Afro hair discrimination for schools across England.

The campaigners said their aim was to raise awareness of hair discrimination in the UK and highlight the ways in which black or mixed-race children with afro-textured hair are treated unfairly.

In 2019, a study conducted by the World Afro Day charity found that one in six children with afro-textured hair has had a bad experience at school.

The group says hair discrimination can be as obvious as using offensive words to describe a person's hair, or touching someone's textured hair without their permission to do so.

L'myah Sherae joined with Members of Parliament to found an All-Party Parliamentary Group for Race Equality in Education, which involves politicians from different political parties working together to try to make sure children from ethnic minority backgrounds are treated fairly.

Once the online survey has finished, L'myah will take the results to the government and help to write the new guidance.

"This, we hope, will transform schools across England, Scotland and Wales," she says.

"Ensuring that schools are safe and supportive environments for black children must be the core priority here. We want to ensure that no child is ever sent home from school for wearing their hair naturally, or in a protective style, again."