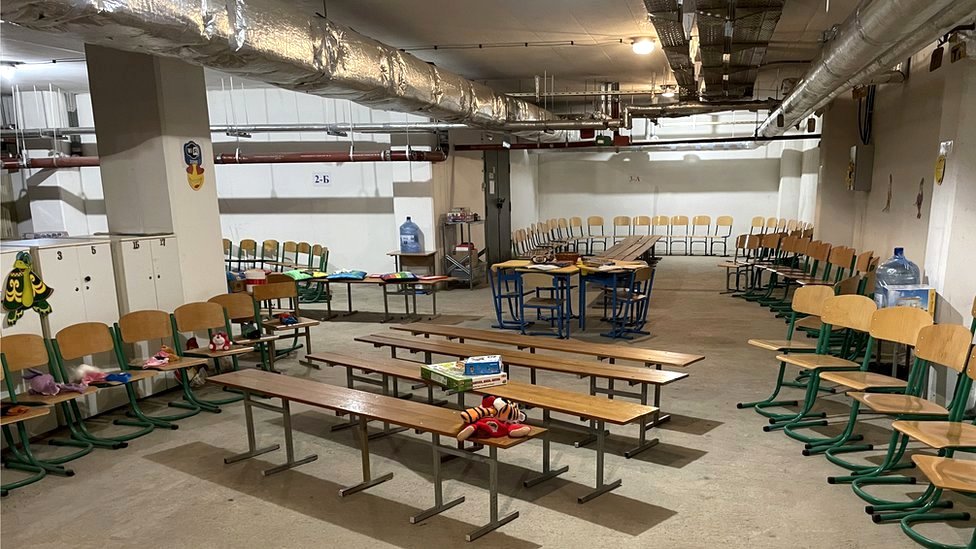 It's September, which means school holidays have finished and across the UK students are back in class.

But that's not the same for pupils in Ukraine.

Tens of thousands of children will not head back to the classroom, with just 40% of schools able to fully reopen, according to local authorities.

James Waterhouse is a BBC correspondent out in Ukraine and he sent us a special report from a school which has been badly damaged by the war.

In February this year Russia invaded Ukraine. Russia's President Vladimir Putin sent in his army and since then Ukraine's army has been fighting against the Russians.

Many other countries around the world have been using other ways to try stop Russia and help Ukraine, including the UK which has given money and military help.

Millions of Ukrainians had to leave their homes to escape the war, including some who have come to the UK.

Now BBC reporter James Waterhouse has taken us around a school that found itself at the heart of Russia's attacks.

Found just outside the capital city of Kyiv, this school in the town of Irpin has been badly damaged.

"The Russians have since pulled back but you can still see the damage for yourself. There's a bomb crater there," the BBC's James Waterhouse told Newsround.

Nearly every window is shattered, pieces of bombs or shells have marked and damaged the walls and a hole where a bomb has hit the playground has been left.

"And while the Russians have pulled back, they have still taken large chunks of territory in the south and east of Ukraine and this war is really far from being over," says James.

"Thousands of children across the country won't be able to go back to school because of what's happened," says James .

'Old displays on the wall'

Inside the school you can see the destruction caused by the war.

"The ceiling is black from smoke and from burning. This block was hit around 40 times from bombs, the floorboards have been torn up," says James.

"In the classroom you can see old displays on the wall."

The school is close to the capital city of Kiev and after it was abandoned it's thought both Russian and Ukrainian soldiers used the school as a base because of its location.

The Ukrainian military pushed back Russian forces, but for the 2,000 students who attend here, only two year groups will return this year. The rest will be taught online.

While many school buildings need now need renovation which could take months to finish, local politicians want to show they are doing as much as possible to get schools starting again.

James says that for many children and their families September it's a chance to see your friends again and a chance to find a routine.

"But for the 2,000 pupils at this school and many more across Ukraine they aren't going to have that chance.

"Only 40% of schools in the country are ready to go back to full time teaching."