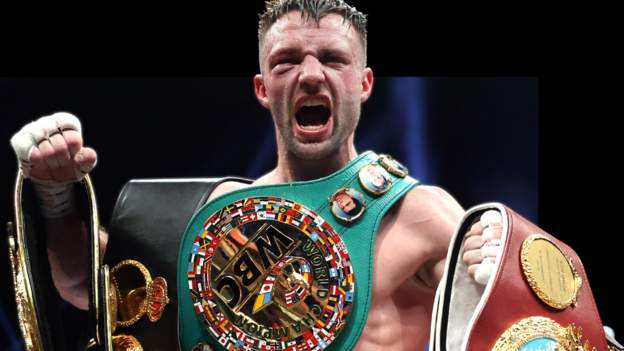 He has received a level of acclaim within boxing for his extraordinary feats, but the exposure generated from a highly-controversial points victory over Jack Catterall in February has been like nothing the Scot has experienced before.

It was Taylor's first defence of all four light-welterweight world titles - and a fight Catterall deserved to win. The Englishman believed he won, most ringside and television observers agreed, as did the vast majority of boxing pundits.

Even Taylor, who has consistently said he felt he did enough to earn the decision, has softened his stance slightly, admitting he would not have complained had it been Catterall's hand raised in victory rather than his own.

The fallout was toxic. The British Boxing Board of Control ordered an investigation into the scoring of the fight and subsequently demoted one of its judges.

The Speaker of the House of Commons, Sir Lindsay Hoyle, even wrote to the police questioning the judges' decision. Hoyle, it should be noted, also happens to be the MP for Chorley, Catterall's home town. • None Taylor hints at weight changes after points win

"The morning after the fight, when I turned my phone back on, it was just comment after comment, abuse after abuse," the 31-year-old tells BBC Scotland prior to the screening of a new documentary about his life and career, Josh Taylor: Portrait of a Fighter.

"I stayed silent for a couple of weeks - then my little sister started getting it, then my fiancée Danielle. Personal attacks on their personal pages that were nothing to do with boxing.

"It's been pretty disgusting some of the things people have been saying. It is what it is and we move forward."

One of the most powerful parts of the film is when Danielle describes in horrific detail the online abuse and threats she suffered in the aftermath of the fight.

No matter what you think of Taylor - and opinion is more mixed than you might expect for one of Scotland's greatest-ever sportspeople - nobody is deserving of such abuse. Certainly not family members who have never set foot in the ring.

Taylor is a complex character. As his friend and former two-weight world champion Carl Frampton describes him in the documentary: "He has almost this split personality where one minute he's nice and the next he's not."

That perhaps partly explains why Taylor is not as popular as his skills and boxing resume suggest he should be.

Unlike many modern-day athletes, Taylor's views on social media are, for better or worse, entirely unfiltered. He often airs his views about divisive issues - he was an outspoken critic of the government's handling of the Covid crisis - and with that comes divided opinion.

His relationship with Daniel Kinahan has been another source of criticism. In 2020, Taylor signed with the management company, MTK Global, founded by Irish cartel leader Kinahan. He last year said of Kinahan: "He's a great advisor and doing great things for the sport."

In April this year, the US State Department issued a $5m reward for information leading to the arrest of Kinahan. MTK announced it was to cease trading days later.

"I haven't got a relationship with Daniel any more," Taylor says. "MTK is no more, so everything is sort of out the window.

"I now manage myself, moving on with a lawyer doing all my contract and management work. Moving forward with Top Rank (his promotor), so yeah, that's it.

"I'm not really clued up with any of the stuff that was going on. Obviously the stuff that has come to light has been pretty serious, but no, I'm focusing on boxing and it's nothing to do with me."

It's a similar tone to that adopted by Tyson Fury, another fighter with links to Kinahan. "It's none of my business," was the heavyweight champion's mantra when recently questioned about Kinahan.

As with Fury, the stain of Taylor's association with a man allegedly involved in drug trafficking and money laundering will be hard to erase.

Many were perplexed by Taylor's lacklustre show against Catterall, but the documentary offers some clues.

"I don't think I can ever remember in sparring being this bad for this long. I feel like I'm just not at the races," an exasperated Taylor at one point says to his trainer, Ben Davison, in the weeks leading up to the fight.

Seeing a hideously gaunt, weight-drained Taylor desperately trying to sweat off the last few pounds in his hotel room before the weigh-in is genuinely shocking - and a stark reminder of what prize fighters put their bodies through.

Coming into camp too heavy, struggling to shift the weight, picking up Covid and injuries, lacking motivation - they are all valid reasons why Taylor fell so far short of his own standards.

None of that should take away from the excellence of Catterall, though, and that's what makes a potential rematch so fascinating. Is Catterall that good? Was it just an off night for Taylor? Has he peaked? Or are his greatest days yet to come?

The Tartan Tornado - who last month vacated the WBA belt - has been looking for one big career-defining fight. Settling the score with Catterall in a huge domestic rematch could well be it.

"If I could do it myself without all the complications of the boxing business, the next fight would be Jack Catterall straight away, put it to bed," Taylor says.

"Fight him again and then move up to welterweight, but I'm not making that mistake again of looking past [the next fight] and saying 'This is what I want to do'.

"I know that's what I was doing wrong, I didn't have the motivation. There will be no lack of that this time."

Josh Taylor: Portrait of a Fighter airs on the BBC Scotland channel at 22:00 BST on Tuesday, 21 June and will be available after transmission on BBC iPlayer.