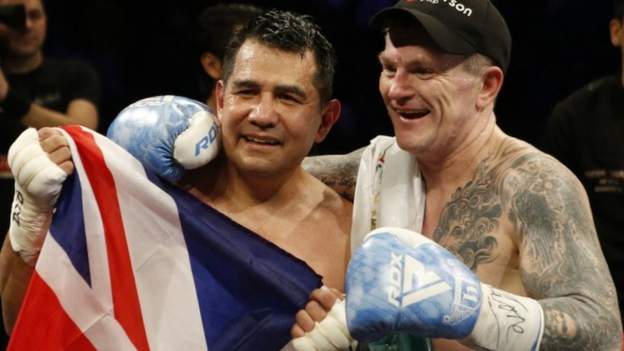 Two 'shows', one ring, two very different headliners - it was not your average fight night in Manchester on Saturday.

But the last fight was an exhibition bout between former world champions Ricky Hatton and Marco Antonio Barrera, both long retired.

"I felt like I was gong into the unknown a little bit," said Hatton, who at 44 lost four stone for the fight. "Was it a spar, was it a fight, or was it something in between?"

The contrast made for an interesting evening and posed the question: is there a place for exhibition fights in boxing?

Hatton was returning to the scene of some of his greatest triumphs, most notably his stoppage of Kostya Tszyu in 2005, but hadn't fought since his last professional fight here in 2012.

During his career, the Mancunian made light of his knack of piling on weight between fights, calling himself 'Ricky Fatton' and wearing a fat suit.

And although he has since established himself as a trainer at his own gym in Hyde, he admits he had again become "massively obese".

But the opportunity to fight former three-weight world champion Barrera, 48, proved the catalyst to get back in shape and give Manchester fight fans another chance to see the 'Hitman' in action.

While only the bottom tier was open, the arena looked full, and a pocket of fans cheered on local fighter Bradley Rea, who lost to Tyler Denny.

Otherwise, the atmosphere for the undercard was strangely subdued, and while Liverpudlian Jonas has become a fans' favourite in Manchester, now winning two world titles here this year, a walk along the concourse suggested who most had come to see.

With three fights still to come, revellers were already chanting "there's only one Ricky Hatton".

'I'm not for my pipe and slippers just yet'

It was the first time she had headlined at a major venue as a professional and there was tension in the air. The crowd appreciated what was at stake.

And although Jonas produced a polished performance which showed she was worthy of winning a third world title, it never produced the moments that had fans roaring from the rafters as happened back in Hatton's heyday.

The Manchester crowd joined her in celebration all the same, and that gave way to a party atmosphere to greet the arrival of their hometown hero. • None 'My best year' - reaction as Jonas wins IBF title

The ring was tweaked for the exhibition bout before Mexican music was played for Barrera along with an upbeat version of Blue Moon, the anthem of Hatton's beloved Manchester City.

There would be eight two-minute rounds, with no judges and no winner confirmed. But Hatton's steely gaze from the opening bell and the sharpness of his punches showed he meant business.

Hatton had to take it seriously, with Barrera having had two exhibition bouts last year, but he's not lost his sense of humour. Two women dressed in nurse outfits were waiting ringside with a comedy-sized zimmerframe.

A band also kept the carnival spirit going by playing tunes such as the Rocky soundtrack and Rule Britannia during the fight, which provided little drama, but it was fun.

This was far from a case of two overweight, punch-drunk fighters having one agonising last dance.

It was two friends, two legends, enjoying what they do best, and Manchester fight fans getting a chance to pay homage to a man who remains one of the city's favourite sporting sons.

At the end, the referee raised the arms of both fighters, but for Hatton in particular, the victory was just being able to get back into the ring.

"I'm well happy with that," said Hatton. "I think it was entertaining, no liberties were taken. We could showcase our skills one last time for the fans.

"I got the chance to find out first hand how good he was, which was a dream come true. But more importantly, it's ended up being a lifestyle change for me.

"I've reached a nice stage in my life where I don't want to balloon anymore. I'm not for my pipe and slippers just yet."

'When it's done for the right reasons, it's inspiring'

Hatton also used the platform to raise awareness of mental health, talking to the crowd about suffering from depression at the end of his career, and the buzz around his exhibition bout didn't overshadow another glory night for Jonas, it enhanced it.

"I'm not usually a fan of exhibition boxing but when it's done like that, for the right reasons, it's inspiring," said Jonas' promoter Ben Shalom.

"We've all seen Ricky fall off the rails then we see him come in looking like that. That's what it's about. It's great for the city and the sport. Ricky Hatton's a legend and is still able to draw a big audience."

And it wasn't just his fans cheering ringside after the fight. His parents, his brother and his son - both boxers themselves - were there too after witnessing his transformation.

"I've done so many great things in my career but this has got to be up there," Hatton added.

"There were a few sceptics that said this exhibition was going to be a waste of time. I don't think that was, far from it.

"You always worry about your heroes, how they could get hurt. But one last time where they can see us with the risk of no-one getting hurt, I think that's a winner.

"What it's done for me, I've had letters from people saying, 'Ricky, you've inspired me to get the weight off. If you can do it, I can do it'. Also people with mental health [issues]. And some people say those exhibitions aren't worth it.

"If another one comes forward, I think I'd have to get stuck into it."