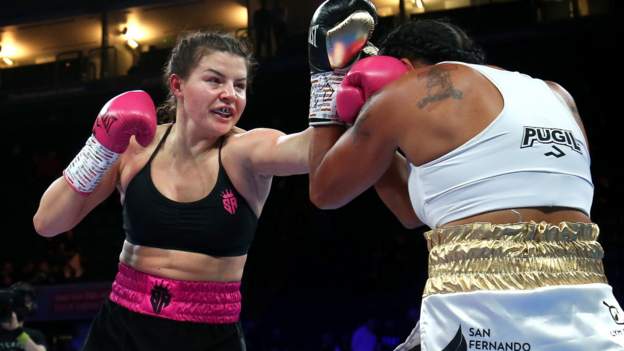 Last updated on .From the section Boxing

Sandy Ryan says she got to know herself better and proved what "she is about" by avenging her first and only professional defeat to date.

"When I took that loss, the people that were in the changing room are the people I have around me now.

"When you take a win, you want to see how many people are in the changing room.

"Now that makes me think when I'm winning, yeah I'll take the praise and stuff but I will be more grateful for the praise from the team that was around me when I took a loss."

Derbyshire's Ryan, who won Commonwealth Games gold in 2018 during a successful amateur career, said 38-year-old Farias became her sole focus when she was beaten in a split points decision in Nottingham in March.

Any path she would take to challenging for a world title had to include the Argentine's scalp.

"I wouldn't have wanted any other fight knowing I took a loss," Ryan said.

"For me to avenge that loss, and in good fashion really, put me in good ranking - I showed my boxing ability against a world-class operator.

"There are not many females who do that, you see them take a loss and they don't avenge that and try another route to the top.

"It just shows what I'm about."

Ryan, who only went professional in 2021 and racked up four wins in five bouts in 16 months, said she and and her team will hold promoter Eddie Hearn to his claim that she would soon earn a tilt at a world title.

"I'm capable of it and deserving.

"Every boxer wants to be challenging for a world title and I said it since I turned pro. So it means everything."