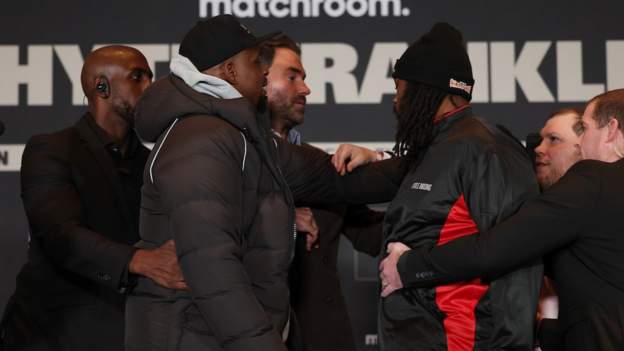 Last updated on .From the section Boxing

Dillian Whyte angrily dismissed the idea he is a "wounded lion" before his fight with Jermaine Franklin on Saturday in London.

Whyte hit back, mimicking the American and insisted his "fire never goes".

The heavyweight rivals face off on Saturday evening at the OVO Arena in Wembley in a crucial encounter for both men.

Franklin, 29, is undefeated in 21 fights but relatively unheralded as a top heavyweight as he is yet to fight a seasoned contender.

Whyte, 34, is fighting for the first time since being stopped by Tyson Fury in their fight for the WBC heavyweight world title in April. • None Listen: Whyte on Fury, Franklin & and the future

'We're just going to finish him off'

Franklin took a backseat during the media conference, saying little when called upon and Whyte followed his opponent's lead during his time on the mic, saying he has no intention of "underestimating" his opponent.

It was not until Addison was given a second chance to speak that tensions began to rise rapidly.

"The healthy lions are going to destroy [Whyte]," Addison said.

"This man is the healthy lion. He's been knocked out two times out of his last three fights, he's a wounded lion.

"This guy is undefeated. We're just going to finish him off."

Salita's comments prompted Whyte to heckle the American, telling him to "shut up" and mocking his accent.

Whyte was visibly fired up by the accusation his best days after behind him following losses to Fury, Alexander Povetkin and Anthony Joshua.

And tensions boiled over during the customary face-off when Salita got involved in the verbal exchanges.

Whyte and Salita shoved each other, causing security to rush in and separate the two teams, although again Franklin showed no sign of emotion, almost completely unmoved by the insults flying around him.

Eddie Hearn said afterwards Salita was urging Franklin to tell Whyte he would knock him out and that is what sparked the angry reaction.

A win for Whyte will allow him to angle for a rematch with long-time rival Joshua, who will have his own comeback fight early next year.

"I'm still a predator at the end of the day," Whyte said of his return.

"I've always been on the outside, even when I was at the top of my game. I'm used to it. My fire never goes. I don't think it'll ever go."