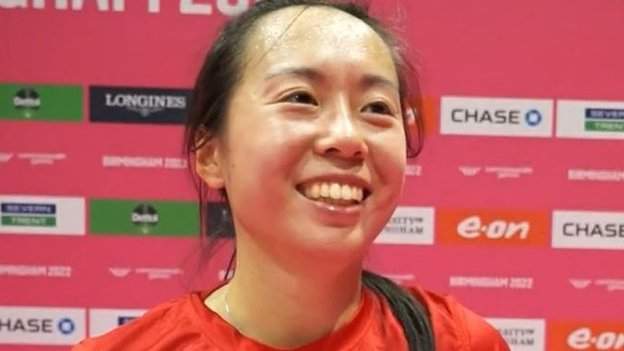 Last updated on .From the section Commonwealth Games

Isle of Man badminton competitor Jessica Li has praised the "amazing" support she has been shown at the 2022 Commonwealth Games in Birmingham.

Despite the loss, Li said it was "great to have such amazing Manx support out there".

Speaking to Manx Radio after the match, she said she was "a little bit disappointed with how I played, a few more errors than I'd like".

"But that's what's difficult about badminton, when you're playing against someone like Kirsty who puts you under so much pressure with your shot quality you have to do the best that you can at the time," she added.

"You're under a lot more pressure when your opponent is of that quality, and she's a great athlete."

Reflecting on the support she received from the crowd at the NEC, she said: "It's great to have such amazing Manx support out there.

"Huge thanks to everyone that came down and supported... sorry that I couldn't get the win."

Having had to withdraw from the last Games in 2018 through injury, Li said it had "definitely spurred me on, made me work even harder to put myself in the best shape I could coming into these games".

"To win two rounds was amazing, and then last 16s of the Commonwealth Games, I couldn't ask for more," she added.