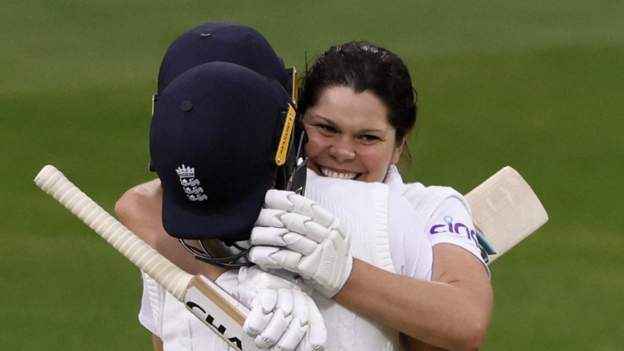 Last updated on .From the section Women's Cricket

The pair played together between 2007 and 2011 at Epsom College.

"It meant a lot having Nat there," Davidson-Richards, 28, said.

"From driving up to Loughborough [England's national cricket performance centre] together, however many years ago, to playing in a Test match together was really, really special."

England were 65-0 before slipping to 86-3 when captain Heather Knight was run-out after a mix up with Sciver.

When Sophia Dunkley and Amy Jones fell - and Davidson-Richards and Sciver came together - England were 121-5, still 163 behind.

But Sciver and Davidson-Richards put on 207 - England women's second-highest partnership for any wicket in Test wicket - in 58 overs to change the momentum of the game.

In a relaxed post-match interview both said they were more nervous for each other approaching the landmark.

"I am a bit all over the shop," Davidson-Richards said.

"It was one hell of a day and I really don't think even if I'd dreamed like that it could have gone any better. I am pretty chuffed."

Davidson-Richards is back to the England fold first the first time since her only previous international appearances - six white-ball games in 2018.

She admitted there were times since where she thought her international career was over.

"I definitely feel like there were stages where I didn't feel like it was possible," Davidson-Richards told BBC Sport.

"[It was] not that I didn't think I wasn't good enough, but I definitely think I am a better player and a more rounded person now and I'm more ready for it now and I'm just taking it all in while I can." • None Davidson-Richards on her tears after England recall

Sciver has scored five centuries in one-day internationals, including in the World Cup final against Australia in her last innings for England, but this was the first time she has reached three figures in the longest format.

"It means everything really," said Sciver, who is playing in her eighth Test.

"I feel like I've been close a couple of times and it is brilliant to get three figures and to do it out there with Alice."

Skipper Knight was out for eight when she failed to make her ground having been called through for a single by Sciver.

"I was feeling the guilt, definitely!" Sciver said.

"She has forgiven me though, she's told me. If I'd gotten out without getting to a century she might not have."