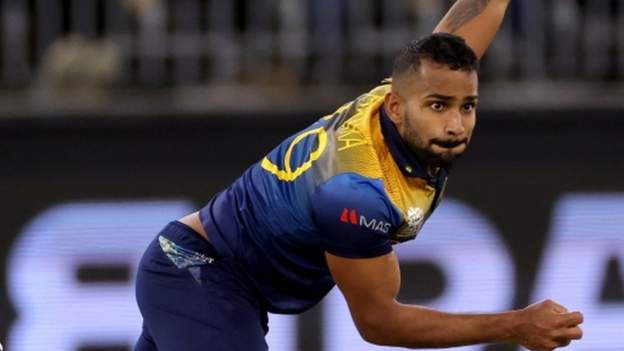 Last updated on .From the section Cricket

The SLC began the inquiry after Danushka Gunathilaka was charged with four counts of sexual intercourse without consent.

They did not elaborate on how Karunaratne, 26, had breached "several clauses" of his player agreement.

However, it did say that the bowling all-rounder had pleaded guilty to all the charges levelled against him. He was also fined $5,000 (£4,152), the SLC board said in a statement.

I"Considering the seriousness of the violations committed by Karunaratne, the inquiry panel by its report has recommended to the executive committee of the SLC to strongly warn the player to refrain from further violations and to impose a punishment that will not have an impact on his cricketing career," the statement added.

A three-person panel is investigating Gunathilaka's case, although the 31-year-old batter has already been suspended by Sri Lanka.

Gunathilaka was arrested a few hours after Sri Lanka's final game of the World Cup - a four-wicket semi-final defeat by eventual champions England on 5 November.

He was then charged with sexual assault and was granted bail last week. • None From old pick-ups to the fastest car on the planet: