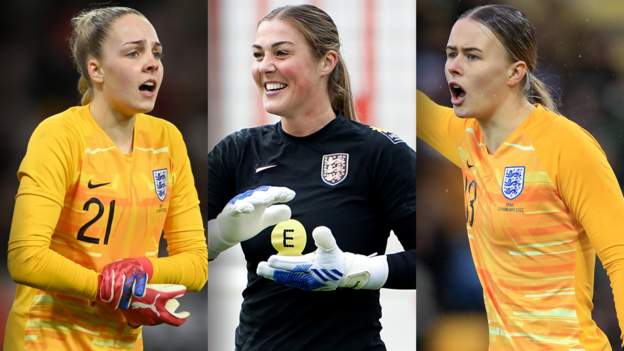 Euro 2022 kicks off on 6 July and hosts England are among the favourites to win the title. BBC Sport is looking at how different areas of the Lionesses team are shaping up, starting with part one: the goalkeepers.

Manchester City's Ellie Roebuck was the undisputed first choice for Great Britain in last summer's Olympic Games, but a lengthy injury this season has opened the door for Manchester United's Mary Earps with England.

Earps' form for club and country has put her in the driving seat, but an impressive England debut by Aston Villa's Hannah Hampton in February and Roebuck's return to fitness has created healthy competition.

"In previous tournaments England have had a clear number one goalkeeper and you're worried about anything happening to them. It's great going into a tournament that you have top-class goalkeepers fighting against each other."

Manager Sarina Wiegman said in April: "I think the three goalkeepers now in the squad are really competing with each other, which is really good because it's a luxurious position." • None All you need to know about Euro 2022

Earps, 29, was given the biggest vote of confidence in April when Wiegman said she was "our first goalkeeper" before the World Cup qualifying victory over Northern Ireland.

Wiegman has been impressed with Earps since recalling her to the squad in September. Earps had been absent from England duty since 2019 under former boss Phil Neville.

"I was resigned to the fact that [going to the Euros] would never happen all the way up until I got an email saying I was going to be picked for the September camp," Earps said earlier this year. "I never thought this would ever happen.

"I've learnt in a bit of a tough way that things can change really quickly. I'm trying to not think too far ahead in the future. I'm loving it so far. I'll see what happens."

Earps, who has started all but one of Wiegman's games in charge, said it is "an incredible feeling" to go into the tournament as the number one.

"I'm immensely proud I've been given the job and I will just do my best. I've worked very hard to be in this position," said Earps.

"It's super competitive. I think the group of goalkeepers are an incredibly talented bunch. It's brilliant that we have good relationships with each other. We come together, have a laugh and challenge each other. It's a really good group."

'I'm just grateful to be back'

While there is no doubt Earps has jumped up the pecking order in recent months, the return of Roebuck has provided strong competition.

The 22-year-old has already achieved a lot - making eight England appearances,being first choice at the Olympics, playing in the Champions League, winning the FA Cup and claiming the 2020 Women's Super League Golden Glove.

Her former team-mate Karen Bardsley told BBC Sport last year Roebuck was "going to be the future of England and Manchester City".

Despite Wiegman confirming Earps was number one in April, Roebuck has had a few weeks to impress on camp and will be keen to earn an appearance at her first major tournament with England.

"Sarina came in at England and I'd missed out on the first few camps with such a huge summer ahead, so there was a lot of uncertainty and a lot of things that ran through my mind at the time," said Roebuck in May.

"Now I'm just so grateful to be back on the pitch, because there were points of rehab where I really didn't know if I'd make it to the back-end of the season."

Hampton, 21, has had a breakout season at Aston Villa where she has continued to impress with her distribution and shot-stopping.

Her international career has been one in waiting - the young goalkeeper was left out of the Team GB squad for last summer's Olympic Games and had not made an appearance for England until February this year.

But her debut performance against Spain earned plenty of plaudits and Villa manager Carla Ward believes she can "go on to be one of the world's best".

After her debut, Wiegman said: "Hannah is a young player and very talented. She needs games like this to develop. She has high potential and showed that."

There is no denying her potential, but the Euros probably comes too soon for Hampton to make a claim for the number one shirt.

She is expected to be Wiegman's number two this summer, but is Hampton ambitious for the long term?

"Yeah, obviously. Ultimately, it's hard for keepers. There's only one position and as a keeper you want to play. But at the minute that's not my aim," she said.

"My aim was just getting in the squad and I didn't think back in November I would be here. It's a dream come true, and if an opportunity comes you just try and take your opportunity." • None Go behind the scenes of the building project • None 'It's funny he had these insecurities':