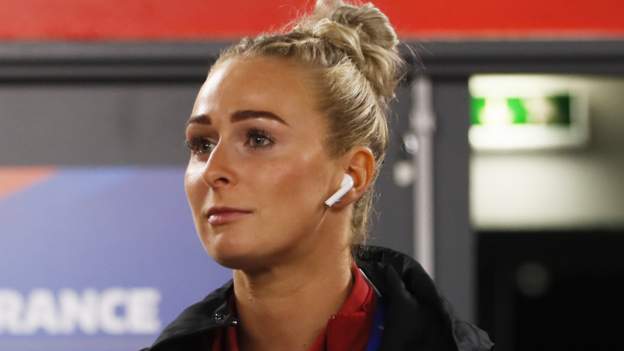 Last updated on .From the section Women's Football

Little did Rhiannon Roberts' new husband know that his wedding was about to go viral.

This was footage of the football match played between male guests and female guests at the wedding of Wales and Liverpool defender Roberts and former Blackburn Rovers coach Nathan Rooney.

The game was Rooney's idea. The decision to put the video on social media was Roberts'.

"My husband said to me 'let's play five a side, girls versus boys'," explains Roberts, who is with the Wales squad preparing for Tuesday's friendly with New Zealand.

Rooney has also coached at clubs including Crawley, Carlisle and Fleetwood and is currently manager of Gibraltan side Bruno's Magpies.

Despite the fact that she was wearing a flowing wedding dress, Roberts turned and rolled a shot through the legs of the goalkeeper - her stepfather - and into the net to trigger protracted celebrations.

"It was very difficult in the dress - I am not going to lie," she says with a smile.

"I changed my shoes over from heels to trainers for the night. I did a little turn, a little one-two and I nutmegged my stepdad.

"I went 'wow'. I thought I had won the league again to be honest."

It was only after the wedding that footage of the bride's sharp finish emerged.

"I think it was the morning after or the day after that, and I said 'oh my friend's just sent me some videos through'," Roberts says.

"I watched and saw she had got my goal. I thought that's funny, I am going to put it on Twitter.

"Nathan went 'oh don't, it's going to go viral'. I went 'don't be daft' and I was like 'send'. The next thing I know I was like 'oh my days, this is going everywhere'.

"It's been on so many different channels - I probably can't keep up."

Roberts' wedding-day goal has been viewed hundreds of thousands of times on social media.

She will be in the spotlight once more - and for more orthodox reasons - on Tuesday evening, when Wales meet the Kiwis in Pinatar, Spain, in a friendly which will offer a final chance for fine-tuning before key World Cup qualifiers against Greece and Slovenia in September.

For Roberts, cap number 48 will be a first Wales appearance as Mrs Rooney - although there will be no change of name on her shirt.

"I can't put Rooney on a Wales shirt, or a Liverpool shirt for that matter," she says. "So I am going to stay with Roberts for now."