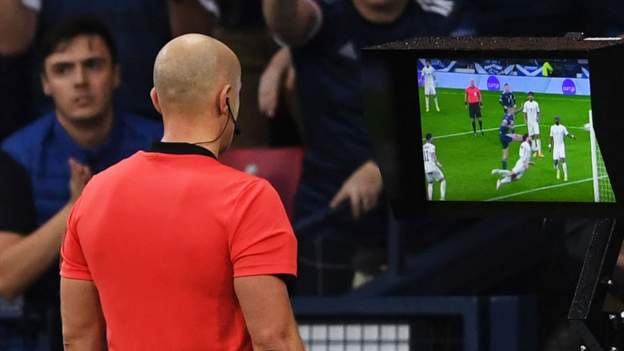 VAR will be run "in the background" of Premiership matches prior to its formal introduction in December, says Scottish FA chief executive Ian Maxwell.

Maxwell defended the decision to introduce VAR midway through the 2022-23 league campaign.

"I would want to have it introduced as soon as we possibly can do it," he told BBC Radio Scotland's Sportsound.

"I don't see the value in waiting. If you've got a mechanism to make more better decisions, why would you not get that in as soon as you possibly can?" • None Scotland appraisal has to be balanced - Maxwell

Maxwell explained training for referees will be completed "fairly soon".

"We need to test the hardware, the software that's gone into stadiums to make sure that is sending the right signals back to the hub and everybody can see what they should be seeing on the screens," he said.

"We also need to get the referees used to using it on a matchday. We'll actually run it in the background. There'll be a number of games at each stadium that are tested. There will be VARs at the central hub and they will be doing what they will be doing if it was a live game.

"The only bit that won't happen is the referee won't be asked to go and review a decision.

"There will be less cameras [than in England]. We'll have six. The feedback that we've had from Fifa and from other nations that have got a similar system is that you don't miss very much, if anything at all."

'It will cause issues' - analysis

I understand why we need to have it. I've never been a fan of VAR. There's still going to be all kinds of debates. It is still open to interpretation and some identical situations will go different ways.

There's still a human element to it. We expect every decision to be right now and it's not going to happen. It will cause issues [introducing it midway through the season] but there will be issues afterwards.

We need to bring it in when it's ready. I've been a player that's been impacted by VAR in its good moments, its bad moments.

For the greater good of the game, we're falling way behind the rest of Europe. I don't think it will run seamlessly. You're going to have trial and error.