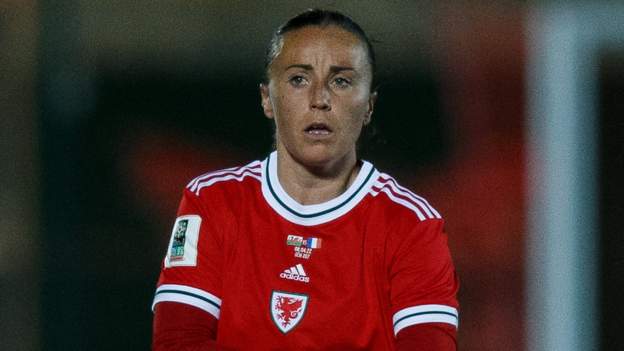 Last updated on .From the section Women's Football

Wales forward Natasha Harding says she has signed for a new club, but will not reveal her next move until later this summer.

She is expected to join another Women's Super League side and has been linked with the likes of Aston Villa and Leicester City.

"I signed for a club a few weeks ago, but I want to keep it to myself for a few more weeks," said Harding.

"It was all sorted quickly after I said I was leaving Reading. I had options and it all happened quickly."

Harding, who reached 100 caps in March, is with the Wales squad for their friendly against New Zealand in Pinatar, Spain on Tuesday, 28 June (18:00 BST).

She was an ever-present at Reading last season but is thought to want to play in a more attacking role than she often occupied with the Berkshire club.

"I'm going on holiday after the game against New Zealand - I hadn't been before coming into this camp because I wanted to get everything sorted," Harding told BBC Sport Wales.

"I'm going to enjoy my holiday and then everyone will know where I'll be playing next year."

Harding is a key figure for Wales manager Gemma Grainger, who says the former Manchester City and Liverpool player's next move will be a good one.

"When it does come out who she has signed for, I think that will really show where she is at as a player and the ambition [she has] and the progression she still wants to make," Grainger said.