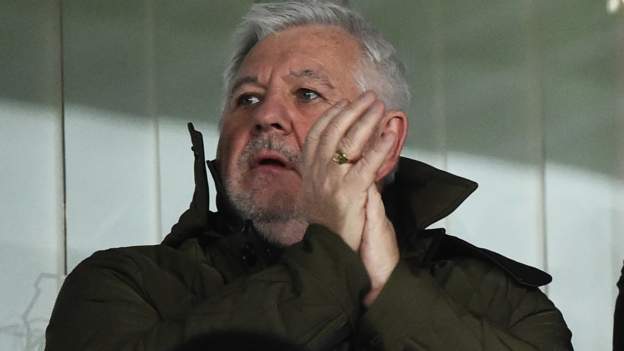 Wayne Rooney's agent Paul Stretford is confident neither he nor his company will face action over a loan it made to pay Derby County's wages last month.

The money - thought to be about £1.6m - was given to the club's administrators Quantuma, pending clearance of Kirchner's funds, which it was still thought at that time would eventually arrive.

Without it, Derby would have been at risk of a further points deduction after already having 21 taken off last season's total for various financial and administration issues, which resulted in relegation to League One.

"We were surprised that details of this investigation have appeared in the press while the investigative process is ongoing. Regardless, the Triple S Group is confident in the legal advice it sought originally and will continue to cooperate fully with the FA to resolve this matter swiftly."

BBC Sport understands that when Kirchner made his request for funding, Triple S officials spoke to legal experts who said it would be fine to make the payment.

While Stretford has been named in many reports, and had a close association with Kirchner as the planned takeover progressed - and was pictured sat with the American at Derby matches - it is being stressed Rooney's long-time adviser does not own Triple S, rather his family have a minority shareholding in the company, which also looks after England and Manchester United defender Harry Maguire.

Debate has swirled around the Kirchner bid for weeks and reached a head on 8 June when BBC Radio Derby commentator Ed Dawes reported that the American's attempt to buy Derby was likely to collapse, and that the wages had been paid by a third party close to the club.

Kirchner denied Dawes' story but five days later announced he was withdrawing from the process.

He subsequently told BBC Sport that he only knew his attempt to buy the club would not be completed 24 hours earlier, when he came under pressure from board members who complained that Derby was becoming a distraction in the sales process of his US company Slync - and demanded that he sever ties.

Kirchner says the whole process cost him money and it is understood Triple S will claim the payment for the wages back from him, rather than the club's administrators.

BBC Sport was told earlier on Tuesday that the planned rescue bid by local businessman David Clowes is likely to go through on Wednesday as anticipated.