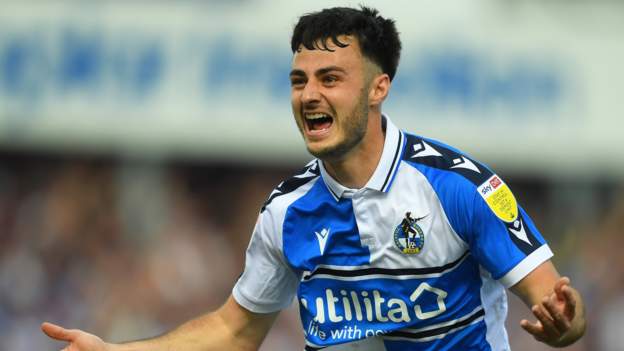 Bristol Rovers striker Aaron Collins says the team are "full of confidence" ahead of the new season, following their dramatic promotion to League One.

Collins, who joined the club last June, was their top scorer with 18 goals.

"We've come in full of confidence. The team bond is there," Collins told BBC Radio Bristol.

"Last season it was a lot different where we had a lot of new players. We know at the start of last season we weren't at our best. That took a while to bond and once we'd bonded we showed everyone how good we were.

"There's a lot of similar players, there's obviously been a couple let go, but there's a lot of the lads from last year still there, as well as new recruits which are only going to strengthen us.

"We're looking forward to it a lot. We don't know what to expect but I think we're all ready for the next chapter to do as well as we can."

Collins scored twice in the remarkable victory over Scunthorpe, which saw Bristol Rovers leapfrog Northampton Town into the automatic promotion places. It was the first time Bristol Rovers had been in the top three of the league all season.

"I've watched videos back and everything on Twitter over the last two months, but I still can't get my head around it," Collins said.

"It was like a blur going from three o'clock that day to whatever time we finished the next day. The celebrations after - all a blur. The game - all a blur.

"But when I watch it back it just gives me goose bumps because I don't think anyone will ever do that, to make history and win 7-0 on the final day to get an automatic promotion when we hadn't been in the top three all season is just crazy."

Joey Barton's side started the final day of the League Two campaign needing to better the result of their rivals or overturn a five-goal deficit to secure promotion.

At half-time, while Bristol Rovers were 2-0 ahead against Scunthorpe, Northampton were beating Barrow 3-1.

But what followed at the Memorial Ground was a 45-minute period that saw Collins and Anthony Evans both score twice, before Elliot Anderson scored a seventh with five minutes remaining to take the team above the Cobblers.

However, 25-year-old Collins said their belief came the week before the Scunthorpe match when he scored a 95th-minute winner against Rochdale - part of a hat-trick that day as Rovers came from 3-1 down to win 4-3 - to keep their automatic promotion hopes alive.

"It started there and then the games on the Monday where Mansfield and Port Vale both dropped points, they were on Sky. I know all the boys were at home watching it and everything just seemed to be happening for a reason," Collins said.

"We were going into the game knowing we had to do the impossible.

"We knew going into the game it was going to be a massive test for us, but everything happened for a reason with the win on the Saturday and the results going our way."

Anderson's goal prompted a pitch invasion from the home fans which led to a 20-minute delay in the match. During that time, Northampton's match concluded meaning Rovers returned to the pitch knowing they simply needed to not concede to go up.

"I was already in some sort of disbelief when we were in the changing rooms," Collins added.

"I was pacing up and down the showers, the boys were trying to speak to me and I was like 'I can't speak'. I just couldn't believe what was going on."

Fans returned to the pitch after the final whistle and later in the night, Collins was photographed sitting on a lamppost outside the stadium, draped in a team flag as fans crowded below him.

"We were all meeting each others' families and celebrating together, we had a little drink up there. And then I didn't want to get changed, the last thing I wanted to do was take my kit off and take the flag from around my neck," Collins said.

"I just love looking back and seeing them. I know I enjoyed myself as well, I hope, as all of the fans did, because it doesn't happen often and you've got to make the most of it."

Born in Newport, just over the Severn Bridge, Collins returned to Bristol Rovers last summer for a second spell having been part of the club's academy from the age of nine until he was 16.

He was let go as a teenager and went on to make his professional debut with his hometown club Newport.

Yet his 18-goal tally last season was the most prolific of his career so far and despite never playing at League One level before, the forward is setting his bar higher for the new campaign.

"I didn't fully expect to play that number nine all season but I did and I had to take up that role and score the goals, and I like to think I did a good job of that."