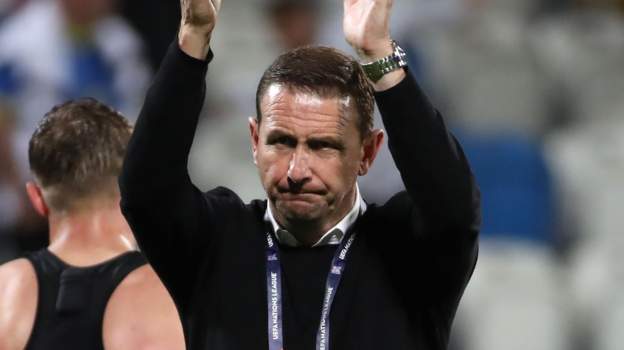 Northern Ireland manager Ian Baraclough says "there is so much at stake" in Saturday's penultimate Nations League match with Kosovo at Windsor Park.

Defeat would leave NI on the brink of a relegation play-off.

"That situation gives the Kosovo match the feel of a World Cup game or a Euros game," said Baraclough.

"There is so much at stake. No one is taking this lightly because there is so much to play for in terms of avoiding relegation and the pot. I like that feeling."

Northern Ireland will be without Kyle Lafferty for Saturday's match after the Kilmarnock striker was withdrawn from the squad amid an investigation by his club into an alleged sectarian remark in a social media video.

The Irish FA said on Friday that it "notes an investigation has been launched into the video" by Kilmarnock and added that a "minor back problem" - which Baraclough said would have ruled the striker out of Saturday's game regardless - also contributed to his withdrawal.

Defeat by Kosovo would leave Northern Ireland vulnerable to a relegation play-off against a follow League C side and the loser would drop into the bottom tier.

Baraclough also stressed the importance of winning to boost Northern Ireland's co-efficient ranking before next month's draw for the next Euros qualifying campaign.

"A lot of work has gone on down the years to improve our co-efficient and our rankings, and in the past that has allowed us to get a decent draw in qualifying campaigns," he said.

"That has improved our chances of qualifying for major tournaments, which is our aim.

We want to win for the fans

Northern Ireland captain Steven Davis added the game against Kosovo is "massive for us", adding that maiden Nations League victory would be for the supporters.

A small number of fans booed Baraclough following June's draw at home to Cyprus but Davis feels the Green and White Army will "continue to back us".

"For 90 minutes they will turn up and back the team during the game," said the Rangers midfielder.

"Obviously results haven't been what we have liked, but we are focused and have had a full week of training, which has been good for us and is something which we don't usually get.

"Hopefully some of the things we worked on in training in the last few days will show in the game and we can get that positive result and hopefully that will be the catalyst for us moving forward."

Davis added that players "won't shirk away from their responsibility" as they look to end a 14-game run.

"We are the ones who go on the pitch, we are responsible for the performances and we know we need to do better," the 37-year-old said.

"We're frustrated as well because we believe we are better than we've shown in terms of getting results.

"The first goal is so important and we are maybe conceding too many goals. There are things we want to tidy up.

"We are all very frustrated in the dressing room because we believe we should be getting better results than what we have shown in this campaign.

"Tomorrow is another opportunity for us to put that right."