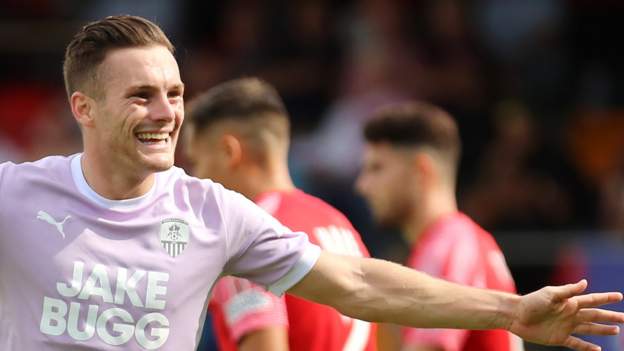 When Manchester City goalscoring sensation Erling Haaland drilled a low shot into the bottom corner against Wolves, Macaulay Langstaff knew what he had to do.

At the time Langstaff was on the Magpies team bus as it snaked its way around London en-route to Dorking.

On the way to last Saturday's game, he and his Notts team-mates were watching Premier League champions Manchester City brush aside Wolves in the early kick-off.

Haaland's goal, his 11th in the league, had raised the expectations on Langstaff's own goal glut - the only player in England's professional leagues who had managed to keep up with the Norwegian in the scoring charts.

Notts had highlighted that statistic on social media a day before their National League meeting with Dorking Wanderers, and the reaction was instantaneous - the moniker as the 'non-league Haaland' was quickly pounced on by Langstaff's team-mates.

"I know it's just a bit of fun, but it was a pleasure to see my name on the goalscoring charts for the top five leagues and see him top and me level with him with 10 before Saturday," Langstaff told BBC Sport.

"Seeing that is a bit crazy. I take a lot of confidence from that, you know. Just to be mentioned in the same sentence as a name like that is brilliant."

While Langstaff was unable to add to his own tally on Saturday, in a 3-1 defeat that ended Notts' unbeaten start to the season, he is determined "to try and keep up" with Haaland.

"As a striker you take small things like that as motivation," said Langstaff, whose six goals in five games in August earned him the National League player of the month award.

"I love scoring goals and want to beat my record from last season."

It was last term's 32-goal haul for Gateshead in National League North that made the Teessider - who was playing for £40 appearance fees seven years ago in the 10th tier - one of the most sought after players in non-league.

Notts head coach Luke Williams was appointed just as Notts were about sign off on deals for Langstaff and Cedwyn Scott, his 26-goal strike partner at Gateshead.

The Magpies boss said it was a "simple" decision to throw his support behind the double signing, after watching highlights, going over the stats and meeting the pair.

After overcoming Covid at the start of the season, former Dundee forward Scott has now scored four goals in his past five games and says he will keep "chipping away" to catch up to and "drive on" Langstaff.

"We both fancy ourselves to score goals," Scott said.

Asked about Langstaff's start to the season, Scott said: "He's called himself the non-league Haaland. But we're not going to let that go to his head."

While Langstaff laughed in reply, saying "there is no way I said that", he freely admits that he has done all he can to adopt elements of the Norwegian's game.

"I watch videos of him and even though we are a little different in terms of the way we play, a lot of what we do is the same," Langstaff said.

"I go home and try to recreate what he does on the pitch. I take a lot of things he does, little tips, his movement in the box is unbelievable. He scores a lot of tap-ins and I watch to try take as much of his game into my game as I can."

Langstaff says it helps that "the gaffer loves" Haaland.

"He shows us videos of him all the time, how good he is and how effective he is," he added.

Williams is keen to see Langstaff avoid having the pressure put on him "to emulate the most potent number 9 in the world at the moment", but appreciates the comparisons being made.

"We know that the levels are far apart, but the attitude and the ideas of the two guys are very similar," Williams said.

One definite thing they have in common is two strikers who have landed in new a league and delivered goals galore for their new clubs.

Langstaff, who was on the books at Middlesbrough as a junior, admits he never envisioned reaching such a level when he went into "early retirement" while playing for Billingham Synthonia in the 10th tier of the game as a teenager.

"I loved it," he said. "I was getting paid to play football every week, no matter how much.

"After my first season with Billingham Synthonia I didn't go back for pre-season because I didn't really want to play anymore. I thought I'd do other things, I was at college.

"But when I saw my mates going to play I missed it a little so I thought I'd go back. I can't put my finger on the exact reason, but I scored a lot of goals after that and from early retirement I ended up signing my first professional deal with Gateshead [in February 2017]."

A loan spell with Blyth Spartans, then a transfer to York City followed before a second spell with Gateshead resulted in a move to Meadow Lane and a Notts side trying to return to the English Football League after a four-year absence.

"I'm hungrier and hungrier every day because of the journey I've been on."