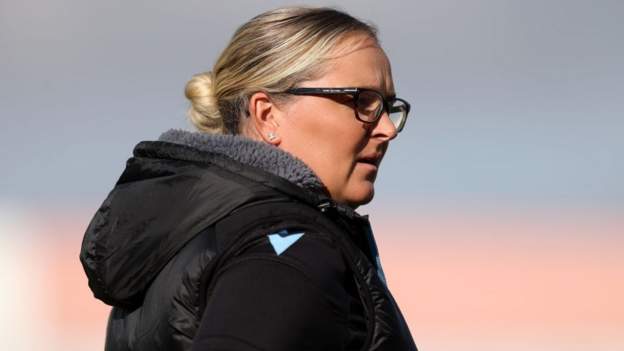 In October, Chambers said "key decisions" had gone against Reading.

"We need to get the best we can right now. We're in a professional league and we're not there with the officials," Chambers said on Thursday.

"We're having these conversations to try to work out a way to improve it. I know it's not going to be a click of a finger but what I have emphasised is that [the WSL] can't be used as a training ground.

"We need to do what we can to get the best - if that's female, male or whoever. We just need the best in the league.

"It's that side of the game right now that is really letting us down in terms of growing the game."

The Football Association (FA) and the Professional Game Match Officials Board (PGMOL) have been in discussions with the WSL over improvements in officiating.

All officials in the top two flights of women's football are currently part-time, and last year the FA said it had no plans to change that in the WSL for at least three years.

Arsenal manager Jonas Eidevall was among those who called for full-time referees in January.

"I know there's plans and strategies in place to improve it," added Chambers.

"We need full-time referees, we're not hiding from that. It's a process but the game is going so fast in its growth now and we need to keep everything growing with it.

"We want to talk about the quality and how it's growing and not the things which aren't growing with it."

Among Reading's frustrations this season was Emma Mukandi's goal that was ruled out for offside against Brighton.

Elsewhere in the league, West Ham captain Dagny Brynjarsdottir was penalised in last weekend's defeat by Arsenal for an infringement on Kim Little, who clearly slipped in the build-up.

Video assistant referees [VAR] are currently in place in the Premier League and the knockout stage of the Women's Champions League.

Asked whether they should be introduced to the WSL, Chambers said it was "obviously something we want to get to" but she wanted more immediate changes.

"My frustrations right now are that the decisions given, or not given, are not even about VAR. It's not a toe over the line - I can accept those decisions," she said.

"When we're talking about two or three yards or a blatant handball in the area, that's just unacceptable. That's not being strong enough in those moments to make those decisions.

"It's frustrating for managers across the league. It can end up costing you points and then costing managers' jobs.

"It's so much bigger than just making a right or wrong decision and all you get at the end of it is 'sorry'. Yes, it's great they have held their hands up but it doesn't change anything for us.

"We can't get those points back for it. Something needs to be done. I don't know what the right thing is but there's ways we can support the officials better in game-changing moments." • None Bad People goes in search of answers • None The champion of two courts ignored by the world: Ora Washington fought to make her name in racially segregated America