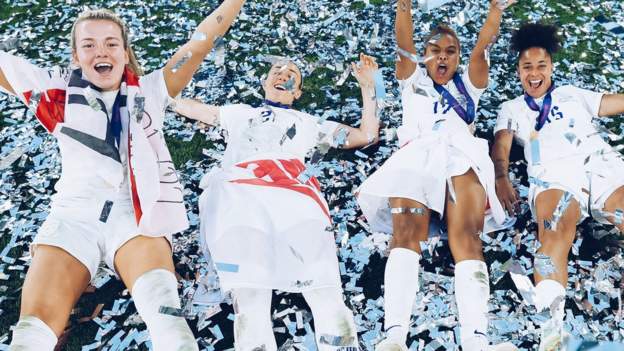 When Chloe Kelly scored the winning goal for England at Euro 2022, many people were feeling the same thing - pure elation.

Had she captured the moment? Did she miss the goal? Was she in the right position?

She need not have worried. The iconic image of Kelly swinging her shirt around her head - Brandi Chastain style - had been caught perfectly and appeared on the front and back pages of national newspapers the next day.

Cameron had the unique privilege of spending every day with the Lionesses during their record-breaking run to the European title.

"Any time I spent with the girls was special," said Cameron, who first started working for the Football Association in an official capacity in 2018. "I'm so lucky they allowed me the space to be in those moments and to capture it.

"That's a bond I don't think you can buy. I pushed for a personal photographer for the Lionesses because people didn't know who the players were before.

"They could walk past them in the street and not recognise them. It was important to me to show their personality and dedication."

Cameron has picked out her five favourite photos of the tournament and, in her own words, tells BBC Sport about her memories of the summer.

The first thing I felt in that moment was panic. This is the biggest moment in women's football in this country so all I thought was 'did I get the shot?' Everything stopped and it felt really calm in the stadium. Then the whistle went to confirm the goal had been scored and Chloe just ran.

She ran to the bench to celebrate with everybody. Friends and family were sat next to the bench as well. You can't pick where you shoot but I would always choose by the bench if I could because that's where the players go, every time.

Some people say she shouldn't have taken off her top but no, she should! She should celebrate that moment. I'm so glad she did.

When you see that photo now you can't help but smile. It was the goal that won the Euros.

Chloe told me afterwards that her brothers had taken their tops off too and were doing the same celebration in the stands.

This was after England's 8-0 win over Norway in the group stages in Brighton. England captain Leah Williamson came over to me while Sweet Caroline was playing and sang 'so good, so good, so good' into the camera.

That was a very personal and special moment for me. Everybody was getting swept along with the atmosphere. It was electric. It felt like there was a real connection with the players and the fans. That was different to covering tournaments before. People were reacting to the players in the way they would to Premier League superstars.

There was a playlist on throughout the tournament at our games. 'Sweet Caroline' came on during the team's debrief once and everybody just started bouncing. Leah told somebody to put the song on later in the playlist so it wasn't in that moment and they could celebrate with fans.

One of my favourite training sessions was always the day after a match. Those who didn't start would train while others were doing rehab. The reason it was so special was that everybody was still happy to be there. They probably trained as hard as they could on those days.

We spent a lot of time together as a squad and I always liked getting a picture of the bench before the game. It made me feel like I was including everyone.

The funny thing in this one is that Jill Scott looks so worried. She is usually always smiling. I didn't see that at the time. She pointed it out to me afterwards. In her head she was probably thinking 'this could be my last match'. Looking back it's more obvious.

There was loads of stuff on the ground and a few of the players came over and said 'right, what we're going to do is run and knee slide.'

I thought that sounded great but then they all started running and I was miles behind because I couldn't run as fast as them - I'm not a professional athlete!

By the time I got there they were laughing. I just suggested we did snow angels instead.

Lauren Hemp [on the left] started throwing confetti in the air. You couldn't force this picture because it was so authentic. That's how happy they were in that moment.

We got back to the Lensbury Hotel quite late after the final. Then all of a sudden it was the morning. It felt like we had no time. Players just didn't want to go to sleep.

I nipped out first thing and brought all the papers back to the hotel. Every newspaper's front page and back page had England winning the Euros. I got goosebumps.

I put them on the table and wanted to have a picture with the captain, Leah [Williamson], the trophy and the papers. I went to find her and came back in and the other players had just come over themselves to read them.

They were still wearing their medals and had come down to breakfast in them. It was a candid moment. The papers were lying in a pile and they started reading them. I gave them a few minutes then said 'right I need them now to get this picture with Leah!'