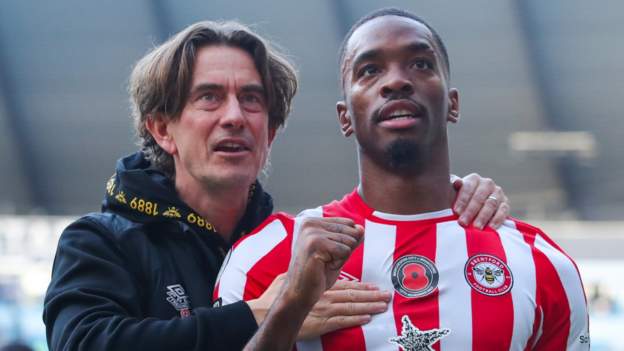 Ivan Toney's show of brilliance came too late to persuade England manager Gareth Southgate to take him to the World Cup in Qatar but his timing was perfect for Brentford as they shocked Manchester City.

It was mystifying that Toney never even got a minute in those two matches before seeing his World Cup dream snuffed out as Newcastle United's Callum Wilson got the nod ahead of him as captain Harry Kane's deputy when Southgate named his squad on Thursday.

Toney might be expendable for England but he is irreplaceable at Brentford, as he showed with a complete performance of mobility and threat literally from first to last as the Bees deservedly beat the reigning champions at Etihad Stadium.

He had already brought a save from Ederson before he headed home Ben Mee's cross after 16 minutes and Toney was a constant thorn in City's side, even after logic appeared to have been restored by Phil Foden's equaliser seconds before half-time.

Ederson was twice forced into action to stop Toney after the break, first with a sharp save to his left from a first-time strike then with a block at his near post, before the decisive moment eight minutes into 10 minutes of stoppage time.

Brentford had threatened then added a final flourish as Josh Dasilva crossed for Toney to sweep home. City were shocked and in disarray as Toney was only denied a hat-trick with almost the final kick of the game when the unlikely figure of Kevin de Bruyne got back to block on the line.

Toney might have experienced a slight drop off after a brilliant start to the season but these two goals made it 11 in 16 appearances this season so he can count himself unlucky to be overtaken by Wilson's late run of form at resurgent Newcastle.

The Brentford striker offered the added bonus of being among the game's most reliable penalty takers, but in the end Southgate was able to resist the temptation to pick him.

Brentford's fans let Southgate know what they felt of him and his decision in the fruitiest terms after his first goal and Toney was locked in earnest conversation with manager Thomas Frank as they took the acclaim in front of understandably elated travelling supporters after this landmark win.

Frank said: "He's fantastic. I can't praise him enough for how good a person he is, his emotional intelligence with his team-mates and the way he is around the club, but also what a player, what a striker.

"Life moves on. You get a big disappointment like he has had but the critical thing is exactly why we love football. The next day the sun rises and we move on again."

Toney has at least given Southgate the clearest possible reminder of what he offers by keeping his name in the frame should England need any late reinforcements.

This looked like the perfect opportunity for Manchester City to go into the World Cup break on the best possible note, with an eminently winnable home game.

Instead, they started almost in a daze as Brentford grabbed the initiative and City never truly took it back, despite inevitable spells of pressure.

The prolific Erling Haaland was crowded out by the well-organised Brentford defence and the fluency that is usually their trademark was conspicuous by its absence.

City had lengthy spells of possession in the second half but Brentford stood firm and there was an air of vulnerability about Pep Guardiola's side that meant it was hardly a huge surprise when they were punished with the winner.

This was Ivan Toney's day, a perfect example of the ups and downs football can offer, from dejection on Thursday to delight on Saturday.

It is a long shot but he has shown once again what he can do just in case Southgate has to call on his list of back-up reinforcements. • None Our coverage of your Premier League club is bigger and better than ever before - here's everything you need to know to make sure you never miss a moment