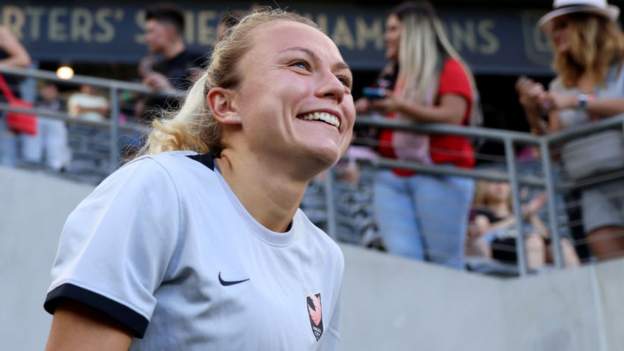 Last updated on .From the section Scotland

Claire Emslie says it is "surreal" playing for Angel City after returning to football in the United States.

"It's a brand new club and they've structured it so well and it's very women dominated," said the Scotland forward

"You feel very valued. We're getting sell-out crowds every week so it's a great place to play. The team's amazing.

"Jennifer Garner was there at our first game. She just loves being a soccer mom. I was staying at a hotel because I had just arrived and I had watched (Garner's film) 13 going on 30.

"The next day going out for warm-up she was standing there giving us high fives. After the game, she was handing out orange slices to everyone and just chatting to us."

California has proved to be a home from home for Emslie, who could feature for the Scots against Venezuela on Monday.

"I love it," she explained. "I spent a few years out there already when I was at college. That was in Florida.

"Being over on the coast, it's so nice. My brother lives there, he's got his wife and two kids. It's nice being closer to them and spending family time with them so I don't actually feel that I'm too far from home."

Emslie was part of the team that lost to Republic of Ireland in the Women's World Cup play-offs and says the current camp in Spain with a group of new players like Brogan Hay is helping ease the disappointment.

"We're still hurting from not qualifying," added Emslie. "It sits with us and we're not going to forget that for a while. It is devastating.

"I don't think there's anything we could've done differently in preparation. On the night, it just didn't go our way. No lack of effort from the girls.

"This camp, we've got a new fresh faces. It's nice to have that environment where we can kind of move on and just focus on the future now."