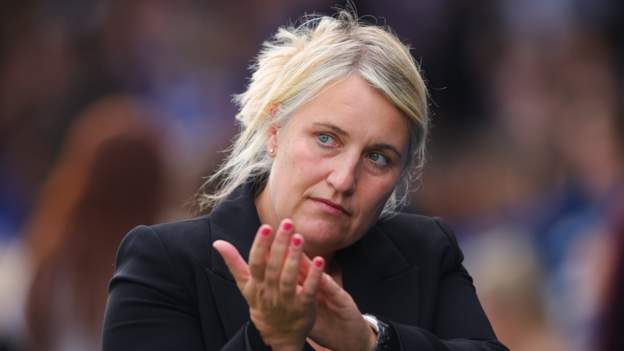 Chelsea boss Emma Hayes has said it is "nice to be back" as she returns to the touchline for her side's match against Tottenham at Stamford Bridge on Sunday.

Hayes added: "I've had six weeks of recovering and I still think it will take probably through the rest of this year to return to complete normality."

Chelsea have won all six of their matches across all competitions in Hayes' absence.

"I'm happy to come back to a team that's been doing really well in my absence and to be around the players and staff again," she said.

Hayes, who has been communicating with Reddy and Green via an ear piece during matches, said she has been pleased with what she has seen during her time away.

"I was happy with the way the team was playing. I feel so confident with the work my entire staff are doing that sometimes those conversations were just interactions between Denise and I," she said.

"She's done a superb job anyway without me being there, along with Paul. We've got such an experienced group that it's been comfortable for me to heal without the stresses."

Chelsea are level on points with Arsenal at the top of the WSL although Arsenal have a game in hand. With tickets for Sunday's London derby against Spurs sold out, Hayes said she was looking forward to being back with the fans.

"I'm just really looking forward to seeing the fans and to get the chance more importantly to be with my team again. There's no better place to play than Stamford Bridge."