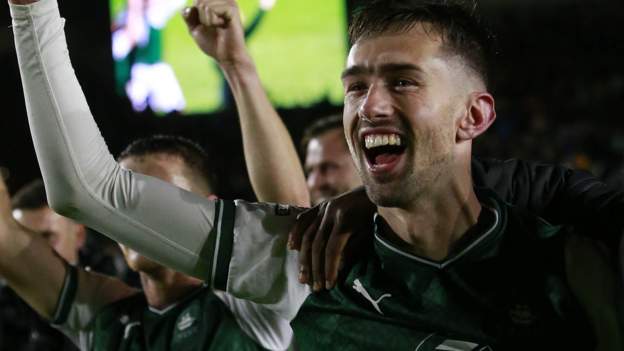 Last updated on .From the section Plymouth

Plymouth Argyle striker Ryan Hardie says he is aiming to top the club's goalscoring charts for a second successive season.

"Last year I got top goalscorer by quite a few goals, this year I'll hopefully do the same," he said.

"I'm in front in terms of the cup goals but there's a tie in the league so it's good," Hardie told BBC Radio Devon.

The Scot and Swansea City loanee Morgan Whittaker each have seven goals in League One, with Hardie edging ahead thanks to two goals in the Papa Johns Trophy. • None Exeter goals some of Hardie's most important

The Pilgrims have shared the goals about much more this season - Niall Ennis has seven in all competitions, while Finn Azaz has six and Sam Cosgrove five as manager Steven Schumacher rotates his forwards.

"You want to play every game and you're disappointed when you don't start," Hardie added.

"But I think we've got a good understanding that we will get time on the pitch, you're not a sub in that sense, you're ready to impact the game in the second half.

"It doesn't mean you've played poorly in the game before if you start on the bench in the next game because the gaffer has a game plan for every single game.

"It's working well, the three of us don't get disappointed if we don't play, and we're always ready to make an impact which the subs mostly have done this year.

"You want to play every game but you can't use the disappointment because you're always going to get a minimum of half an hour to come on and make an impact."

Hardie finished last season with 19 goals, but missed a large chunk of the run-in after suffering a thigh injury in March.

He said this season's target was to top his mark from last term.

"My personal target is always to beat last season's goal tally and it was 19, so the obvious target is 20 this year," he added.

"I think I've started pretty well this year, I'm on nine for the season, using the cup goals as well as they all count, so the target is to get 20 this year.

"Once I get there I'll set a new target. It'll probably be 20, then 25 and then just keep going, but the main target is getting 20 to start with and we're on the way now."