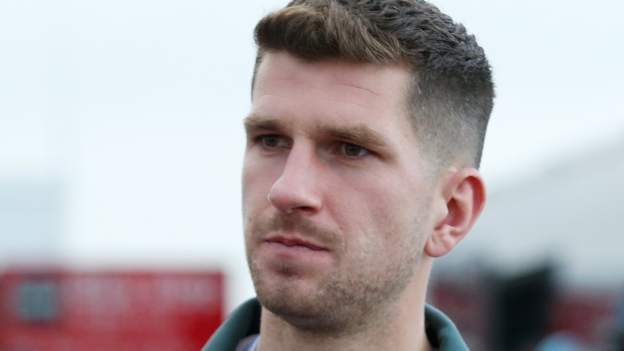 Last updated on .From the section Welsh

Wales' Chris Mepham says he is still "pinching himself" after going from playing Sunday League to being picked for the World Cup.

His career began with a string of rejections and being overlooked by various clubs,

"Fast-forward to now and suddenly you're part of a World Cup squad."

As a teenager the centre-back was released by Chelsea, and previously acknowledged that he found himself "in a dark place."

After being rejected by Watford and his boyhood club, Queens Park Rangers, he eventually ended up playing for North Greenford United's reserve side.

A chance visit from a scout saw him impress enough for Brentford to offer Mepham a second crack at the professional game, with the London-born player going on to make 48 appearances for the Bees.

From there, a £12m move to Bournemouth followed and an introduction to the international stage with Wales, for who he qualifies for via his grandmother on his father's side of the family.

"Of course there's been a few bumps along the way," said the 33-cap international, who was part of the Wales squad who reached the last-16 of last summer's European Championships.

"But ultimately I'm really proud of what I've achieved so far, but I definitely want more of that.

"I was fortunate enough to have played in the Euro 2020 campaign.

"I loved every minute of it and I remember coming away from that tournament and thinking to myself "I want more of that", so naturally you're going to be looking at that next tournament coming up.

"That was the World Cup, and then you get brought back down to the reality that it's a tough, tough competition to qualify for.

"Fortunately and deservedly so we're in a position to be competing with the best teams in the world in this tournament.

"A lot of top players for Wales over the past 64 years have missed out on World Cups so to be part of that generation going to one is something I'm really going to have to sort of be appreciative for."

Robert Page's men kick-off their campaign at the Ahmad Bin Ali Stadium on Monday, with Mepham adding: "It's massive getting off to a good start with a win."