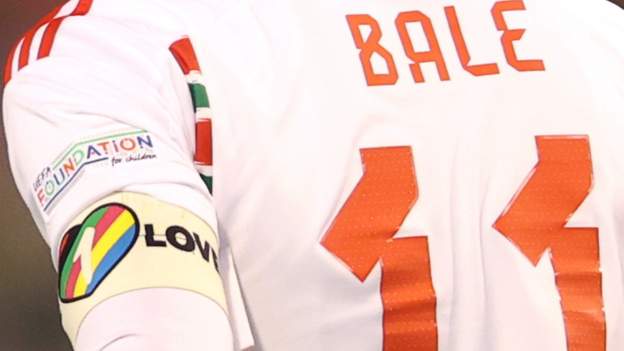 Leading Welsh football figures and organisations have reacted with dismay, anger and disappointment over Fifa's OneLove armband stance at the World Cup in Qatar.

Wales' Gareth Bale was among a group of European national captains who had planned to wear the armband to promote diversity and inclusion.

"But we remain with the belief that football is for everyone and stand with our LGBTQ+ members of the Welsh football family.

In the build up to Wales' first appearance at the global showpiece since 1958, Wales manager Robert Page had insisted Bale would wear a OneLove armband in Qatar.

Pressed on if Bale would categorically don the armband, Page replied: "Yes, absolutely. That's the stance we make, it's from the staff, it's from the Association, we are not going to change our beliefs so that's the right thing to do... we are strong in our beliefs in that.

"Whoever the captain is will be wearing the armband."

However, in the wake of Fifa's threat of bookings, England and Wales will not wear OneLove armbands.

Wales' record goalscorer Helen Ward suggested, if she was involved, she would be "very tempted" to test Fifa's resolve in Qatar, where homosexuality is a criminal offence.

"It could be a once in a lifetime moment, it's their job, it's what they've done all their lives to get to this point. It's the pinnacle of so many players careers and yes they do have a responsibility as people of high standing in society.

"But also the responsibility of their countries and what their government's do - that shouldn't rest in their shoulders."

Ward added: "I'd be very tempted (to wear the armband). It depends on the type of player you are I suppose.

"As someone who doesn't tend to get booked very often I'd probably chance my arm that I wouldn't get another booking in the game. It would make a huge stand if they did decide 'you know what I'm going to do it and take a booking anyway'.

"But obviously the nations have come to an agreement that the stance they are taking shouldn't effect their play and I do understand that stance as well because it is interfering with the game itself."

Former Wales strikers Iwan Roberts and Nathan Blake joined the chorus of disapproval of Fifa's move on the day England and Wales kicked off their campaigns.

"So much for freedom of speech, it doesn't count for this part of the world," said Roberts.

"You wouldn't want Gareth to pick up a yellow card for wearing the armband and then picking one up in the second game against Iran and possibly missing the England game.

"I think it's just poor from Fifa. They're trying everything not to fall out with the host country.

"Had the majority of captains from all the countries decided to wear the armband and go with whatever punishment then possibly that would have been a solution and a way of getting the message across.

"I don't like the way it has been put simply to the players, it's either we are all in this or we are not. Once you start to fraction people, those who are trying to stop you wearing it they win automatically.

"It's a situation that shouldn't just be down to the players again to have to show what we believe is right. If someone else doesn't and you're in another person's country I understand that, but we are at a football tournament and I should be within my right to be able to wear it without hurting anybody."

Blake added he does not think there should be disciplinary action for those wearing the armband.

"The only disciplinary action can come from Fifa and Fifa should be strong enough," he added.

"If you want to make it political fine, but like I said before, politics is part of everyday life.

"Some people talk the talk but don't always walk the walk, it's as simple as that."

There was also reaction on social media from within Welsh football: