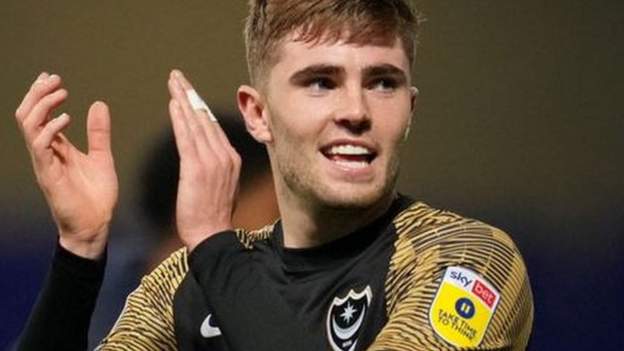 Last updated on .From the section Portsmouth

Portsmouth defender Zak Swanson says he is "enjoying football again" following his arrival from Arsenal in the summer.

"I had to wait my turn," he told BBC Radio Solent.

"That's football, stuff happens. There was talk about a transfer at the end of the window but I wanted to stay."

Swanson was given an opportunity for more regular playing time following an injury to fellow defender Joe Rafferty.

Manager Danny Cowley tried rejigging his back four and following a bit of trial and error ushered in the former Arsenal youngster at right-back.

"I'm growing in confidence a lot and that comes with a run of games when you're doing well.

"Some games are physically more challenging than they are technically and I'm learning new things every week."

Swanson scored his second goal in a Portsmouth shirt against Ipswich Town on Tuesday to guarantee his side a place in the third round of the Papa Johns Trophy.

"It's a good result for us and we want to progress in this competition. Ipswich is a tough place to come so we are delighted with the win," he added.

"We were under the cosh and knew we had to suck it up and to score to take the pressure off.

"Once I saw JK [Josh Koroma] on the ball, I made the run and was one-on-one with the goalie - it was nice to score."

Portsmouth, who are seventh in League One, will find out who their opponent is in the next round of the Papa Johns Trophy on Thursday.