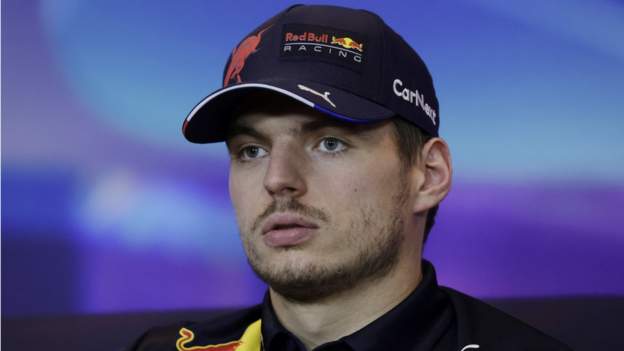 Max Verstappen says some of the reaction to his role in the Red Bull team orders controversy in Brazil has been "unacceptable" and "disgusting".

Verstappen said: "After the race, I looked very bad in the media. But they didn't have the clear picture.

"To immediately put me down like that is pretty ridiculous. All the things I have read are pretty disgusting.

"They started to attacking my family, they were threatening my sister, my mum, my girlfriend, my dad. And for me that goes way too far when you don't even have the facts of what is going on. And that definitely has to stop.

"If you have a problem with me, that's fine, but don't go after my family because that is unacceptable."

Verstappen initially appeared to be referring to responses to the incident on social media but he then also said he had a problem with some of the media reports after the race.

"A lot of people what they have been writing about me is ridiculous," he said.

"At the end of the day you contribute to all the problems social media has by writing these kinds of things.

"It is just incredibly disappointing to read these kind of things. I know how I am and the team knows how I work and I have always been good to the team."

He added: "As soon as there is something negative it needs to be highlighted, it is pretty sickening being part of that. While at the end of the day I haven't done anything wrong; it's just people misunderstood what has been going on."

Verstappen said after the race in Brazil that he had "reasons" for refusing to let Perez back ahead and that he was reacting to "something that happened in the past". • None Schumacher set to lose seat as Hulkenberg joins Haas for 2023 • None 'Spygate' - Fifteen years on from the sporting scandal that had everything • None How to follow the season finale Abu Dhabi Grand Prix on the BBC

There have been reports that Verstappen believes Perez crashed deliberately at the end of qualifying at the Monaco Grand Prix, an incident that prevented Verstappen completing his final lap, which would have given him a position on the front row.

As it was, Perez and Verstappen qualified third and fourth and the Mexican went on to win the race.

A number of sources have told BBC Sport that Red Bull investigated the incident after the race and that Perez admitted he had crashed on purpose.

But Perez rejected that claim, saying it was "wrong", adding: "That's just speculation, and people creating rumours. We are all aware what is going on and we want to keep it within the team."

Verstappen again refused to expand on his reasons for his actions in Brazil, saying it would "stay between me and the team" but he admitted Red Bull had made mistakes in their management of the race weekend.

"It was about something that happened earlier in the season," he said. "I already explained that in Mexico, and the team understood and agreed.

"We went to Brazil and I thought we were just going go to race and get the best possible result. We had a bit of a miscommunication on Saturday and Sunday. Nothing had been said to me about a potential swap or whatever. It only came into that last lap that it was said on the radio.

"And they should have known my response already from what I said the week before.

"After the race we had some good discussion and put everything on the table and everything has been solved.

"In hindsight, we should have had that conversation earlier. I have never been a bad team-mate, I have always been very helpful. The team knows that. I always put the team up front because it is a team effort at the end of the day. What we learned is we have to be a little more open and we just have to communicate better to each other."

However, Perez said that the conversation after the race in Brazil only covered the events of that day.

Asked how long Verstappen had had a problem with his past actions, Perez said: "I don't know how long it is there. We haven't discussed about it."

Red Bull issued a statement on Thursday admitting they had "made some mistakes in Brazil" and that the team "accepted Max's reasoning".

The statement added: "Max was only informed at the final corner of the request to give up position without all the necessary information being relayed. This put Max, who has always been an open and fair team player, in a compromising situation with little time to react which was not our intention."

On-board camera footage makes it clear that Verstappen was first asked to let Perez by into sixth place after Turn Four on the final lap, and again three times as he exited the final corner.

Perez had earlier in the race been told "don't fight Max" when the race resumed after a final safety-car period so he could try to pass cars ahead.

Verstappen moved ahead of Perez but did not manage to overtake Alpine's Fernando Alonso for fifth place, and was told: "If we don't pass Fernando on the exit of 12, can we let Checo through, please, let Checo back through."

When he did not comply, he was asked: "What happened?"

He replied: "I told you already last time you guys, don't ask that again to me. OK? Are we clear about that? I gave my reasons and I stand by it." • None Messi as you've never seen him before: