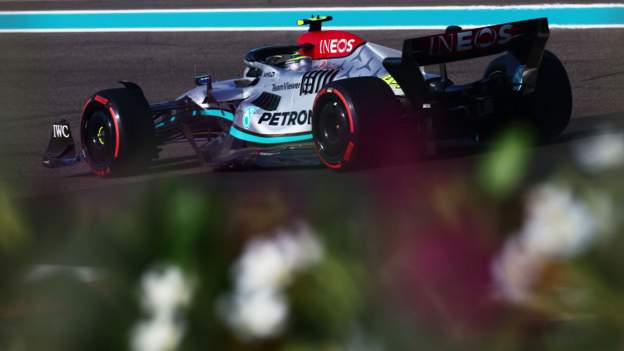 Wolff said: "I am sure this a difficult year was necessary to re-motivate and re-energise the organisation.

"This has made us come back down to the ground, made us appreciate how it feels when you win." • None 'Spygate' - Fifteen years on from the sporting scandal that had everything

Wolff said Mercedes had been analysing how previous dominant teams had lost their edge.

"We are looking at that and thinking we better be careful because a season has gone by, in a heartbeat, and we can't let that happen after next season and the next one," he said.

And he said that he was going to put the difficult 2022 car in the reception at the Mercedes factory in Brackley "so every single day when we come in we know how difficult it can be".

Wolff said believed Mercedes had the necessary tools to return to the front, saying: "We are aware of that, the regulations changed and we got it wrong but all the other pillars are still in place."

But he added: "I'm a glass half-empty guy and never believe the job we are doing is good enough. I am not sure at all whether we can bounce back to a position where we compete for championships.

"Because you need to acknowledge that the competition is strong but we will do everything in our power, everything to set our objectives high and try to reach them."

Wolff said that the team's difficult start to the season, when the car suffered from an aerodynamic phenomenon known as "porpoising" - or "bouncing" - meant catching up with world champions Red Bull would not be easy.

"We lost many months of development because we had to solve the porpoising problem before being able to add performance back on to the car because whatever we added in terms of downforce went nowhere, the drivers couldn't feel it," he said.

"It became even more unpredictable and the bouncing got worse. So considering a six-month delay putting performance on the car will be tremendously difficult to catch up against Ferrari and Red Bull.

"And we have started the 100m sprint 10m behind everyone so we just have to run faster and this organisation has all that's needed to run faster."

Mercedes' only win this season came at the penultimate race of the season in Brazil, courtesy of George Russell.

But the cars were uncompetitive in the finale in Abu Dhabi, where Russell finished fifth and team-mate Lewis Hamilton retired when running fourth with a hydraulics failure.

Russell described Abu Dhabi as "a bit of a reality check and very much needed because we still recognise we have a lot to do to fight with Red Bull next season".

He added: "We have a car with a lot of potential but the performance window is far too narrow and those performance swings from the highs of Brazil, Mexico, Singapore, to the likes of here are far too vast."

Russell said he did not put much store by the fact that he had finished the season 35 points and two places ahead of Hamilton in the championship.

"If you had told me that at the start of the season," Russell said, "I would have been incredibly proud and happy with that because nine times out of 10 if you finish ahead of Lewis Hamilton you are probably going to be world champion.

"But in a season like this, where the car hasn't been performing and we've both had our difficulties… I have no doubt he is going to be back to his normal level next year if the car is capable of a championship win.

"He had a difficult start to the season, things weren't going smoothly for him and they were a bit more smooth for me. That swung around a bit in the second half of the season but it probably balanced itself out."

Asked how he felt having ended an F1 season without a win for the first time in his career, Hamilton said: "I always believed right to the last race that there was potentially a chance, I think it's important to hold on to hope.

"I gave it everything and the last race was almost like the whole season, sums up the whole year and I'm glad it's done.