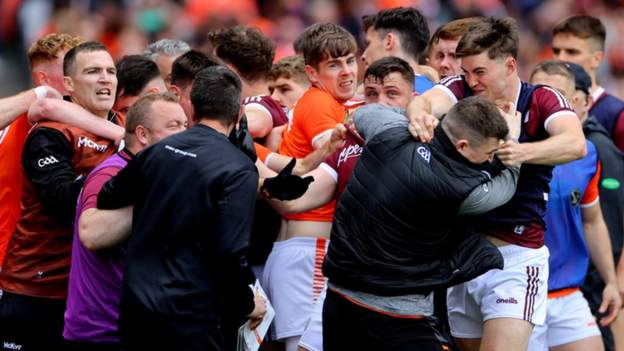 Armagh manager Kieran McGeeney said the mass brawl in his side's gripping All-Ireland quarter-final defeat by Galway "definitely shouldn't have happened" - but said it could have been prevented.

It resulted in red cards for Armagh's Aidan Nugent and Galway's Sean Kelly, but more sanctions could follow.

"It is not something you want to see and I suppose this year that is two of them we have been in," said McGeeney, who was referring to a mass brawl that the Orchard County were involved in against Tyrone in a league match in February after which four Reds Hands players and one from Armagh were dismissed.

"It is unfortunate. Those things shouldn't happen, they definitely shouldn't, but there are a few simple things we could do to stop it. We shouldn't be going in together at half-time."

McGeeney's side lost 4-1 on penalties to Galway at the end of a pulsating game which ended 3-18 to 2-21 after extra-time.

On the issue of what further sanctions might arise from the incident at the end of normal time, McGeeney said he does not want to see a "trial by social media".

"I know how it started but once it starts then it can get out of control," he continued.

"It is not a nice part and I wouldn't want to see it, but trial by social media is a very poor way to go.

"It showed the last time that if people had actually sat down and watched the video they might have got it right instead of listening to people."

Speaking in his post-match press conference, the former All-Ireland-winning captain then responded with questions of his own when asked if players should assume responsibility for their actions.

"If somebody pushed you, would you push them back? It is a yes or a no. If you are not going to answer my questions, why should I answer yours?"