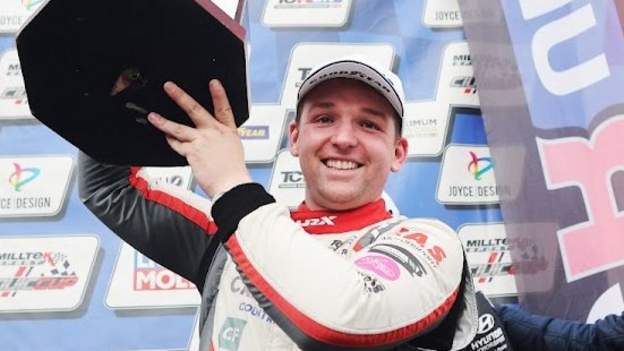 Since he first started karting at the age of eight, Chris Smiley had dreamt about becoming a touring car champion.

When the 30-year-old stepped out of his Honda Civic after the final race, the emotion was etched across his face.

"You don't get many moments like that in life, where you have worked so hard for a full lifetime," said Smiley.

"I have been racing since I was eight years old, and there aren't many seasons where you actually win a championship.

"It was a great feeling and something I will never, ever forget."

What is more impressive is that Smiley and his Restart Racing team only received their Honda Civic Type R just three days before the start of the season and victory came just months after team manager Bert Taylor recovered from serious health problems.

Smiley said both those factors made the championship "even more special".

"Whenever your team is right behind you and you have been with them through so many different things, we nearly had a tear in our eye at the end of the day, in fact we probably did have," he added.

Smiley made the switch to the TCR UK series following six seasons in the British Touring Car Championship, in which he became a race winner in 2018.

TCR UK used to be seen as the younger brother of the BTCC, which has 70 years of history compared to the former's formation in 2018.

However, it is rapidly rising and the addition of a BTCC race winner like Smiley added value to the championship as it looks to rival the elder touring car series.

"The deal was done so fast, but making it all happen in such a short space of time at the start of the season is something we are all very proud of," Smiley added.

"Putting it together in that time is one thing, never mind turning up, putting it on pole position and winning the first race - not many teams could have done that and it was one of those things we will never, ever forget."

Across the seven rounds - spanning from the dips and speed of Brands Hatch and Donington Park to the tight, twisting turns of Castle Combe and Oulton Park - Smiley was consistently at the front and level on points heading into the final round with Isaac Smith.

However, Smiley took control by taking pole position and winning race one - his second victory of the year - and a third place finish in wet conditions secured the title by 21 points.

"With the good old British weather it was nice and wet for the last weekend," Smiley added.

"I was basically fighting with my main title rival throughout the whole final race and it wasn't really decided until the last few laps.

"It was a stressful race and I only enjoyed the last two laps when I knew the job was done, but it was a great weekend and something we are very, very proud of.

'I'm very thankful to a lot of people'

By leading the British championship, Smiley was invited to France a week after winning the title to compete at the Motorsport Games - dubbed the 'Olympics of Motorsport' - to compete against several of the best TCR drivers in the world.

Despite it being his first time at the circuit and teething issues with his brakes, Smiley put in a strong showing to take eighth place around the French circuit.

"It was a great experience and an honour to be asked to go and do it," he added.

"To be in the top 10 and be battling with the front cars, we certainly didn't embarrass ourselves and I think if we went back again we could be in the top five. I'm very thankful we had the opportunity to go and do that.

"Anyone who knows about motorsport or any top-level sport, you have more bad days than good. For us to be able to look back at this year and say we are British champions in touring car championship, I'm very thankful for everyone who has helped me get to this point.

"They have all been a part of it as much I have in winning the championship, so I'm very thankful for a lot of people."