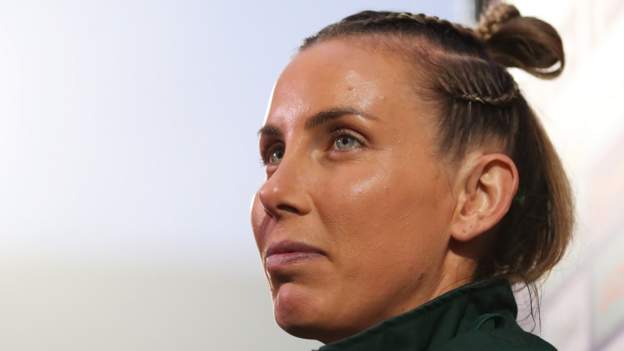 Australia co-captain Sam Bremner says she was "baffled" at feeling she had to decide between a sporting career and motherhood.

There was talk among the Australian press of retirement. Bremner had not played for Australia since 2016. She missed the 2017 World Cup after picking up an injury on the eve of the tournament. She had missed the 2019 season with the birth of her first child. She was now set to absent for a full league campaign for the second time in three years.

But for the player herself, a return to rugby league in 2022 was the "happiest" option. On Saturday, the mother of two will lead out Australia at Old Trafford in the World Cup final.

"I was baffled by the fact I felt like I had to make a choice," she told the the BBC Radio 5 Live Rugby League World Cup podcast.

"I decided I wanted to have a family but I also loved my career. Women's rugby league was taking off and both things made me so happy.

"I thought I'm going to do this so other women don't have to feel this way. They don't have to pick between two things that are so central for their happiness at that stage of their lives."

'I had to reinstall my self-belief'

Following the birth of her second child, Bremner returned to the NRLW in August - having joined Sydney Roosters.

She made an immediate impact, helping the Roosters to an undefeated run in the regular season - although they missed out on the Grand Final. She missed only nine minutes of action as she was named the Dally M full-back of the year.

She admitted "reinstalling self-belief" was critical to her comeback, although she felt it was "even harder" to do as a mother.

"I had watched people in the same full-back position as me performing at such an elite level, I felt really challenged by that," she said.

"You're dealing with a lack of sleep which has a massive impact on your well-being. Having self-confidence is challenging for a lot of people when they are getting good sleep and food and have time for themselves.

"It's even harder to try to install that back into yourself when you don't and are still trying to have a healthy relationship with your family.

"I came up with some tools to really focus on one step at a time. For me it was to get out of bed and brush my hair and straighten it.

"Sometimes that was my only goal as it would make me feel good about myself for the day. As a mum, it was usually the last of my priorities, I was worried about making pack lunches and getting the kids to school."

In early October this year Bremner was named as part of the Jillaroos squad for November's World Cup, co-captaining alongside Kezie Apps and Ali Brigginshaw.

In the Jillaroos' opening group game, the 30-year-old scored four tries against the Cook Islands while running for a game-high of 175 metres.

Now Bremner has a chance of more World Cup success, having been part of the Jillaroos' first triumph in 2013, and staying on as a squad member in 2017 after a calf injury prevented her from playing in Australia's victorious home tournament.

She said: "I used to love it when people said I couldn't do something. After my second child, it was something I really struggled with.

"If somebody has ever been told they can't do something, I hope they can find some inspiration in my story."