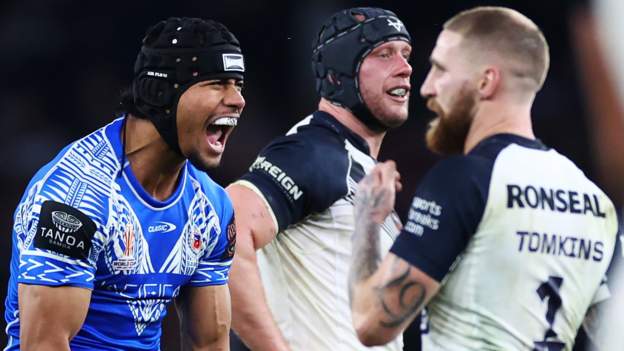 Last updated on .From the section Rugby League

Another Rugby League World Cup, another gut-wrenching failure for England, whose campaign ended in a golden-point semi-final defeat by Samoa.

Shaun Wane's side also bow out of the competition despite being the leading points scorers to a team they thrashed 60-6 in the tournament opener less than a month ago.

But were expectations too high against a Samoa side containing seven players that featured in the Grand Final of Australia's NRL competition and had been cast as third favourites for the tournament behind New Zealand and Australia from the outset?

Or did England contribute to their own downfall? BBC Sport looks at how things unravelled for the host nation.

Tim Lafai's early Samoa try was in many ways a snapshot of what was to follow, with Kallum Watkins caught out of position as his Salford team-mate punished his lapse of concentration.

Instead of reproducing their almost flawless first-half show against Papua New Guinea or their fine display in Newcastle, England's performance was littered with uncharacteristic errors.

However, prior to that Dom Young and Victor Radley had both been culpable for Samoa tries - with the Newcastle Knights winger fumbling a high kick and Sydney Roosters forward Radley passing straight to Crichton.

"It's a big learning day for a couple of guys," said former England international Jon Wilkin.

"Jack Welsby will learn a lot from today, Victor Radley made a telling contribution for the Stephen Crichton try. Dom Young, who we've spoken about in such glowing terms..."

"When you make those errors you learn. They are young athletes who will be infinitely better going forward because of this. I felt that the young English team had a different mentality but they let themselves down because they had set such a high standard."

'It was not the England we have seen'

England's lack of composure was also highlighted by Wane in his post-match press duties, with his side also struggling to build momentum and force repeat sets because they overhit kicks.

And even fleeting moments of brilliance arrived with a large dose of frustration as England's expectant fans rode an emotional rollercoaster at Emirates Stadium.

Having seen Herbie Farnworth's late try bring England back from the brink, Elliot Whitehead's burst threatened to provide a late drop-goal attempt, until the Canberra Raiders second row instead elected to try to find Radley with a pass in an all or nothing moment.

"England have almost regressed in terms of execution and detail today and that's what has cost them," said former captain Jamie Peacock.

"It was not the England we have seen for the last four weeks. I thought they should have won that game by three or four opportunities."

Meanwhile, Matt Parish's squad have evolved and improved with each passing week since arriving well undercooked for the tournament's curtain-raiser.

Over a third of Parish's starting line-up from their previous meeting with England was different when the sides were introduced at the Emirates on Saturday.

"Time has been their biggest asset and biggest help. They didn't have the best preparation coming into it," said ex-Samoa captain Willie Poching.

"Some of the guys weren't in the camp until a few days before, coming into it after the Grand Final. They tried to come into the cauldron that was the opener of the World Cup. They've gelled together as a group.

"They've got a great understanding now and they look like they're playing for a real strong purpose."

Speaking on BBC One, Wilkin added: "What has happened here is Samoa have got to where they expected to be and England have fallen back from where they have been.

"Samoa were one of the favourites coming into this tournament for a reason. It shouldn't be a shock.

"He's [Matt Parish] got seven guys who played in the Grand Final in Australia, they came over here as the third favourites and they have got to the final beating the team they were tipped to beat.

"I got seduced into thinking England were going to do it today, and I let myself down."