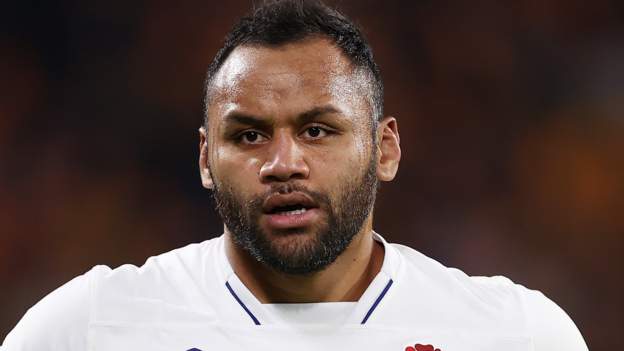 Billy Vunipola is savouring his international "rebirth" after fearing his England career may have been over.

The number eight says being jettisoned was a potential "blessing in disguise" and is determined to take his chance.

"It's probably done me wonders in terms of growing as a player," the 30-year-old told BBC 5 Live.

"It's been like a little bit of a rebirth, being away for a year and then sneaking into the Aussie tour.

"It's made me more well-rounded, and in terms of my mentality as well as what I bring on the pitch.

"I'm happy with what we did in Australia and what I contributed, but I feel there is more for myself to bring."

Vunipola, who made his England debut against Argentina in 2013, was a permanent fixture in the England side under head coach Eddie Jones, but was dropped from the set-up following the meek defeat by Ireland at the end of the 2021 Six Nations.

"When it first happened for the first mini-camp, I'll be honest I thought he was just giving me a kick up the backside and I should be all right to get back in," he explained.

"Then I didn't get picked for the autumn, [there was a] similar feeling in terms of disappointment, but also a little bit of doubt crept in whether I was going to play for England again, and what I could do to get back into the team.

"When I didn't get picked for the Six Nations I was in a mindset where the doubt had gone because I was so determined and focused on being a good player.

"That doubt went away when I was picked for the Australia squad, and in my head I believed I would play for England again."

Having won a recall for the series against the Wallabies, Vunipola bounced back from the first-Test defeat with a dominant individual display as England came from behind to win 2-1.

"Going back into the Test arena, I was hugely excited, but to come away with a loss in the first Test dented my confidence a little bit. But as a squad we questioned why we didn't really go after them.

"That's what we did in the second Test, and that for me was like I had never been away. The second Test felt real.

"Now my goal is to see how well I can play for England, to be able to contribute to the team firstly, but also to not ever be in that position again, and never have my hunger questioned and my motivation questioned.

"That is something I've become stronger at doing from being away. So it seems like a blessing in disguise [being dropped], but I would rather I had been in for the year instead of not playing."

Vunipola is now determined to be a consistent force for England, and is keen not to look too far ahead, with a World Cup looming in under a year's time.

England face Argentina at Twickenham on Sunday, before meetings with Japan, New Zealand and South Africa on consecutive Saturdays in November.

"It's about what is ahead of me now, how can I be ready for Sunday's game if picked, and what can I do in that game to help the team and help myself.

"That has to be my focus. It sounds cliched but that is where I went wrong before. I was always looking forward to something "bigger" or "better", whereas it is right now that is important.

"Right now is what is biggest, and most important."