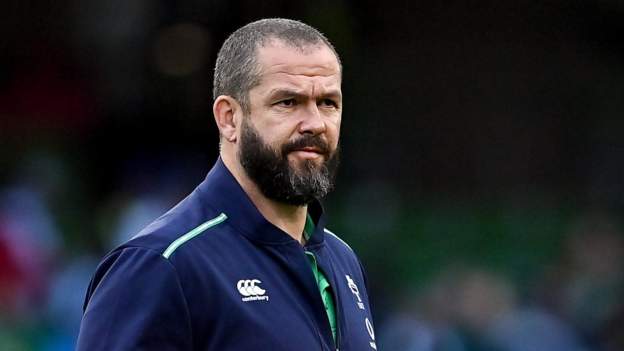 Last updated on .From the section Irish Rugby

Farrell said he was pleased for first-time captain Tadhg Furlong and the three debutants, but was left unimpressed by his side's display.

He said: "As far as the performance is concerned, pretty underwhelming."

Having opened the autumn campaign with an absorbing win over world champions South Africa, Ireland looked sluggish at times against Fiji.

The visitors scored two wonderful tries through Kalaveti Ravouvou and Simione Kuruvoli but were undermined by indiscipline with Albert Tuisue dismissed early in the second half.

With Apisalome Ratuniyarawa's 51st-minute yellow card Fiji were reduced to 13 men and Farrell felt his side did not pounce on their numerical advantage.

"For Fiji, being down to 13 men with the red and yellow cards and the penalty count being 14-10 in our favour, we should have been a lot more clinical than we were," he added.

"I think that's the moral of the story. We got into the 22 time and time again and yes it was stop-start so we lost our flow, but we weren't clinical enough by any stretch of the imagination."

With captain Johnny Sexton among those to be rested, Farrell used the Fiji game to dip deeper into the pool of talent at his disposal, making nine changes from the Springboks win and handing debuts to Jeremy Loughman, Jack Crowley and Cian Prendergast.

Crowley came on for his Test debut early in the second half, replacing Munster team-mate Joey Carbery, who went for a head assessment after taking a late hit from Tuisue.

Asked about Crowley's bow, Farrell said: "I thought he was good. He looked like he had a bit of presence out there.

"He's certainly not a shrinking violet. He backs himself. His first kick into the corner, straight into the five-metre, was a big test for him as far as his character was concerned and he nailed that.

"His communication is very good and it's a good start for him."

Farrell, who has now led Ireland to 11 straight home victories, added: "We're disappointed with the outcome of the game.

"The win is always special in an Irish shirt but the manner of the win is something we will assess and make sure we get to the bottom of."

Ireland lost Robbie Henshaw early on due to injury after the Leinster centre suffered a recurrence of the hamstring issue that ruled him out of the South Africa game.

"He felt his hamstring," said Farrell.

"He doesn't feel like it's anything too serious. We took him off in time so he's not anymore damage so we'll see how it is."

While Ireland laboured to a low-key win over Fiji, next week's opponents Australia were left stunned by Italy as the Azzurri claimed a first-ever win over the Wallabies in Florence.

However, Furlong - who described his first captaincy stint as a "massive privilege" - expects Australia to lift their level for next week's Test in Dublin.

"They're a very proud rugby nations and I'm sure they'll be coming all guns blazing next week," he said.