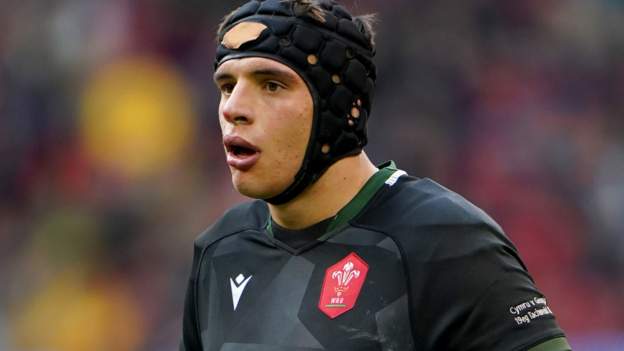 Newly-capped Wales lock Dafydd Jenkins has the potential to become Exeter's captain in the long-term says the club's director of rugby Rob Baxter.

Jenkins captained the Chiefs for the first time in the Premiership win over London Irish earlier this month.

"To me he looks like the guy who could potentially have the job longer term in the future," Baxter told BBC Sport.

Jenkins has played 14 times for Exeter since his debut last season after joining the club during the summer of 2021.

"A lot of it's going to be up to him, all we can really do is create an environment for him to get on," Baxter said when asked how far Jenkins could take his career.

"The one thing is he works extremely hard, he's very diligent, very professional, he's very driven to be successful and to win things and he's a good character to be a leader and be a captain.

"I didn't have any hesitation making him captain when we put the squad together, yes we had some more experienced players in there."

Jenkins joined fellow Welsh forward Christ Tshiunza in playing for Wales this autumn as the next generation of promising young players at Exeter begin to establish themselves.

"It justifies the hard work done on recruitment that other people are seeing the quality they're playing at as well," added Baxter.

"We do back young players at the right level, whenever we do recruit anybody the one thing I'm pleased to have some confidence in is saying don't look around the squad and see where you think the other good players are, because if we think you're playing better than anybody else we'll pick you, regardless of who's here and who's not here.

"We've always said to them 'if you're the right guy we'll pick you', and I've said exactly the same thing to the young Wasps lads that joined us recently."