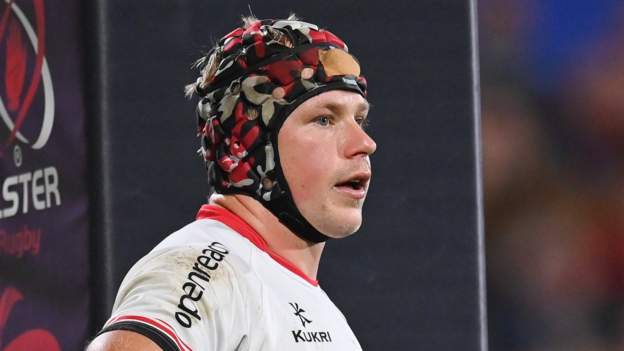 Ulster centre Luke Marshall admits there were times when he feared his career was over as he battled back from a serious knee injury.

A second knee injury kept him out for 16 months before returning to action for Ulster in March.

"You definitely have those thoughts [about being forced to retire]," Marshall told The Ulster Rugby Show.

Marshall broke through for Ulster a decade ago with his performances earning him the 2012-13 Pro12 Young Player of the Year award and a spot in the Ireland team.

However, having established himself as a key cog in the Ulster team, Marshall spent 10 months on the sideline after rupturing his anterior cruciate ligament in May 2018.

And after overcoming a hip problem that forced him to miss the conclusion of the 2019-20 campaign, Marshall injured his knee again that November.

It would be well over a year before he took to the field in an Ulster jersey again, but with the 31-year-old having impressed in recent months, he admits to having struggled with such extended lay-offs while the province progressed with the services of younger centres James Hume and Stewart Moore.

Speaking ahead of Ulster's United Rugby Championship fixture against Zebre on Friday, he said: "Ulster have progressed so well over the last three, four years, particularly over the last two years.

"It's great to see, but at the same time you're going 'they're progressing without me and I'm not as young as I once was' so you have those doubts.

"There were times, like when I did my knee the first time four years ago, that was a full tear and that wasn't ideal.

"The second time I did it I sprained it so I thought I was going to get back within six to eight weeks, but then I did seven months of rehab and at that stage it wasn't getting better.

"Went to another surgeon and he said 'you need your ACL done again'. That seven-month period was probably the toughest. The scans were showing the ACL was fine and that's tough because you know it's not right, but we kept on hammering at the rehab and that was frustrating.

"Once I got the second surgery, I knew it was going to be nine or 10 months, but at least there was clarity there."

Marshall, who credited physiotherapist Peter Scullion for keeping him on the right track during his injury woes, also admitted he struggled to keep pace during pre-season.

"Pre-season hit me like a tonne of bricks," admitted Marshall, who last played for Ireland in 2017.

"I just felt behind the pace of the game. I remember coming home to Grace [his wife] a couple of times and saying 'I'm done, I'm not at the pace and I'm nearly embarrassing myself'.

"I didn't know if I could keep playing at this level, but I got back up to a decent level for the pre-season game and thought I went well in that. I'm happy with the games I've been in [this season]."

Having regained his fitness, Marshall has impressed for Ulster alongside Stuart McCloskey, whose club form earned him a prominent role in Ireland's autumn campaign.

And with three interpros and two European games to come between now and 1 January, Marshall is targeting the next block of games as an opportunity to flourish during a key period of the season in Ulster's quest for silverware.

"We have Leinster next week, which is as big as it gets and then the European champions in La Rochelle.

"I'd love to be involved in those games, test myself at the top level and kick on again."