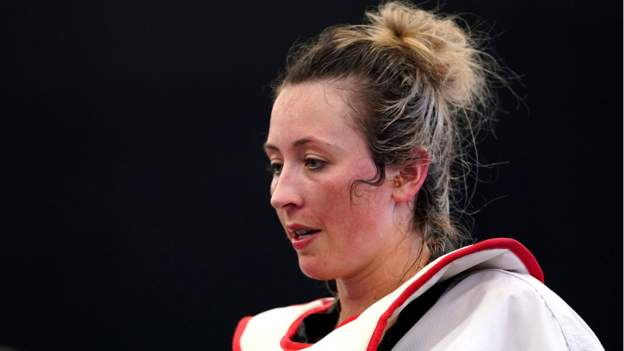 Last updated on .From the section Taekwondo

The Welsh fighter later said anxiety undermined her at the 2020 Games.

Jones, 29, was "gutted" to lose against China's Luo Zongshi at the World Championship in Mexico this week, but says "the belief is coming back".

"I literally had it this time," said Jones, who had won the world title in 2019.

"I won the first round, I hit a head shot in the second round that would have kind of finished it, but I didn't score and I didn't have a card to play and then there were a few unlucky decisions in the third round, plus a few mistakes by me.

"So I am just really gutted because I had it that time. It was right there and I proved to myself that I can do it, but I just fell short again.

"I think it bodes well for the future because it's good progress - she's the best in the world at the minute, so how close I am to her bodes well for Paris.

"But obviously it's just frustrating to come short here and not quite retain my title."

Jones went to the Tokyo Games in 2021 hoping to become the first British woman to win gold at three consecutive Olympics, but suffered a shock first-round defeat to Kimia Alizadeh of the Refugee Olympic Team.

Speaking to BBC Sport Wales, Jones said: "I think it's been a long road from Tokyo. It's tough - I lost all my confidence and was in a bad place, probably the worst place that I've been.

"So I've been gradually clawing my way back and it's tough to come from that kind of loss and I feel like I'm getting better every single time; more and more like myself, more confident, so I just hope it continues to grow and I'm really getting excited now for Paris because the belief is coming back."

Due to the disruption to taekwondo's competitive calendar, the 2023 World Championships take place in May 2023 in Baku, Azerbaijan.

"At least in another six months I've got another bash at it (the world title)," said Jones.

Before that, Jones again hopes to make an impact at the Riyadh Grand Prix, which starts on 8 December.